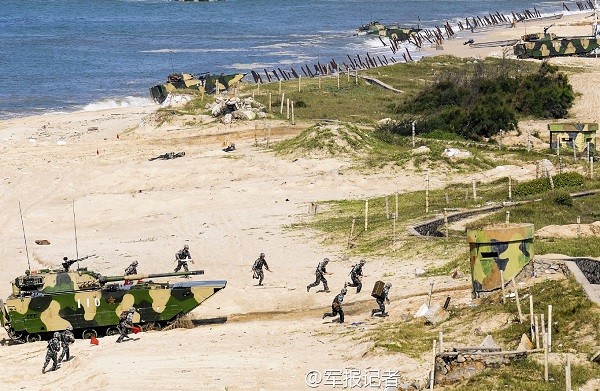 TAIPEI (Taiwan News) — In response to Japanese media reports that China's People's Liberation Army (PLA) is planning on holding war games in August to prepare for a future assault on the Taiwan-controlled Dongsha Islands (Pratas Islands, 東沙群島), China on Wednesday (May 13) threatened that it could turn the military exercises into an invasion of the island and even Taiwan proper itself.

On Monday (May 12), Kyodo News reported that the PLA's Southern Theater Command is allegedly planning a simulated invasion of the Dongsha islands with Hainan island as its practice field. The mock invasion will reportedly take place in August and include a large number of marines, landing ships, hovercraft, and helicopters.

In response to the report, China's state-run mouthpiece the Global Times on Wednesday cited "experts" as saying that the Dongsha Islands are in a "strategically important location and that the PLA has the capability of turning "any exercise into action if Taiwan secessionists insist on secession." The news site neither confirmed nor denied the war games will take place, only saying that the "Chinese side has not announced the drills."

The outlet then repeated Kyodo News' assertion that the Dongsha Islands hold a strategic position, as it is nestled between the Baishi Channel at Taiwan's southern flank and PLA bases in Hainan to the south. It also seemed to confirm the Japanese news agency's speculation that the exercises could be a prelude to China establishing an air defense identification zone in the South China Sea.

The Chinese tabloid then cited "military expert" Song Zhongping as saying that the Dongsha Islands are in a key location off the southeastern coast of China that links the South China Sea and West Pacific. Seeming to allude to a potential pretext for invasion, Song warned that if Taiwan leased the island to the U.S. military for surveillance or anti-submarine activities, "this could be dangerous to the PLA."

Song then blamed flaring cross-strait tensions on "increasing secession activities" by the Tsai administration. He claimed that given this "condition," the PLA will need to prepare for a military confrontation, including holding military exercises, to "warn Taiwan secessionists not to cross the red line."

Song then ominously stated that the landing drills were preparations for seizing Taiwan's outer islands as well as its main island. He warned that the games could be quickly converted into an actual invasion in response to unspecified activities by "secessionists":

"Landing missions have been regular training subjects of the PLA. Island takeover trainings like these are literally aimed at islands, like the Dongsha Islands, Penghu Islands and the larger island, namely Taiwan Island. If Taiwan secessionists insist on secession, military exercises can turn into action any time."