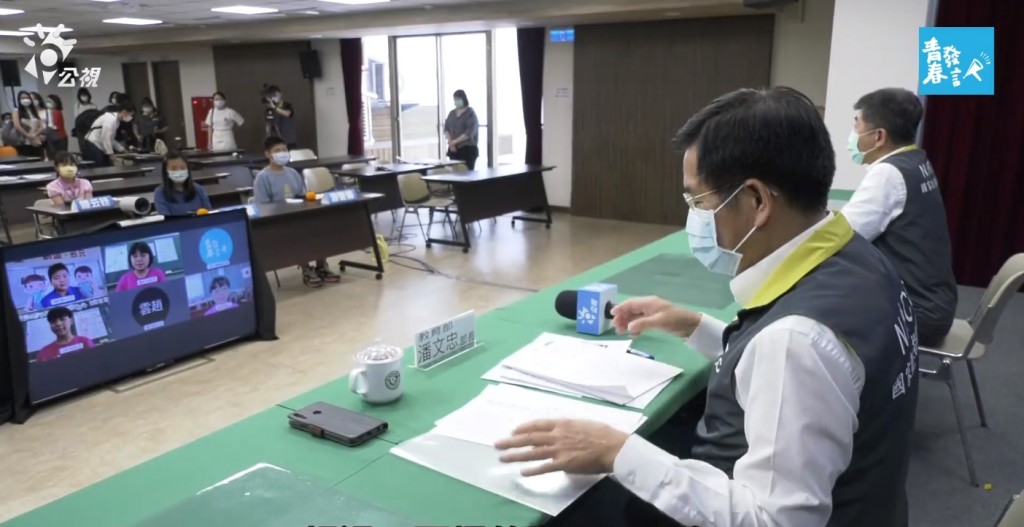 TAIPEI (Taiwan News) — For the first time ever, Health Minister Chen Shih-chung (陳時中) held a “children only” press event, taking questions from elementary and junior high school students who shared their most pressing concerns about the coronavirus (COVID-19).

The "press conference," broadcast on Friday at noon (May 15), took the form of a special episode of a Public Television Service program that targets a student audience. A total of 11 students were chosen from among some 500 to pose questions either on-site or remotely about the coronavirus and the authorities’ approach to tackling it.

The event appeared to be much more relaxed than an ordinary Central Epidemic Command Center press conference, as pushy journalists were replaced by timid yet sincere students. Having hosted more than 100 press conferences since the onset of the outbreak in Taiwan in January, Chen, along with Education Minister Pan Wen-chung (潘文忠), also appeared less formal, smiling at the students as they posed questions not usually put forward by adults.

A Taitung elementary student from the Bunun indigenous group asked if the government would ban the hunting and eating of wild animals. She feared such a prohibition would have an impact on her people, who have a tradition of hunting mountain pigs.

Chen said the government has no intention to do so, as there is no evidence linking any infection to wild pigs. Diseases are more likely to be contracted through physical contact or saliva, said Chen, who went on to say that it is thus important that people wash their hands after touching wild animals.

Students' questions also touched on whether graduation ceremonies, which usually take place in summer, would be canceled due to the coronavirus; whether it is safe to play basketball without a mask; and if the delayed sports events would be resumed sometime soon.

Others expressed concern about a lack of access to computers or stable internet in rural areas, which could hinder students’ studies, as many schools have implemented remote learning. Still others said they are worried about being infected by their peers who constantly go out for fun or that if they contract the disease, they would face discrimination at school.

Before the event concluded, Chen said he was glad that students have so closely followed the disease prevention efforts the government has rolled out in the past few months. He added that he was even more impressed by how articulate the students were when asking questions.