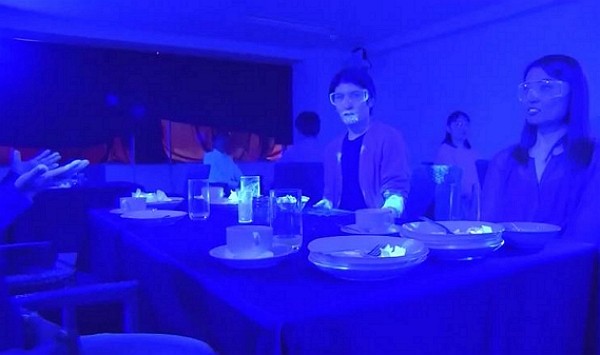 TAIPEI (Taiwan News) — As governments around the world continue to educate their citizens about the importance of washing hands and avoiding crowded areas, an experiment conducted by Japan's public broadcasting network NHK has shown how easily the coronavirus can be spread through indirect contact.

Since the outbreak, several cruise ships, including the Diamond Princess and the SuperStar Aquarius, have fallen victim to infection clusters of the deadly virus. Researchers have pointed out that self-service buffets and movie theaters aboard ships are high-risk areas for group infection.

In an experiment set up by NHK in conjunction with infectious disease experts from the St. Marianna University School of Medicine, a cruise ship buffet was stimulated with ten participants.

Out of the ten "buffet guests," one was designated as an "infected" passenger with fluorescent paint marked on his hand to stimulate an infection caused by covering his mouth while coughing. The participants were then asked to eat at the buffet as they normally would do for 30 minutes. After the half hour, researchers turned on black lights to reveal where the paint had spread.

Paint could be seen on the hands of all ten participants, including three who ended up with paint on their faces. The "infection" was also spotted on the participants' plates, food, napkins, drink container handles and serving utensils.

Professor Hiroyuki Kunishima of St. Marianna University stressed that the simple demonstration showed why keeping sound hygiene practices was important as he urged the public to take appropriate measures at social gatherings. He added that the washing of hands is still the most effective way to prevent contracting the virus from surfaces.