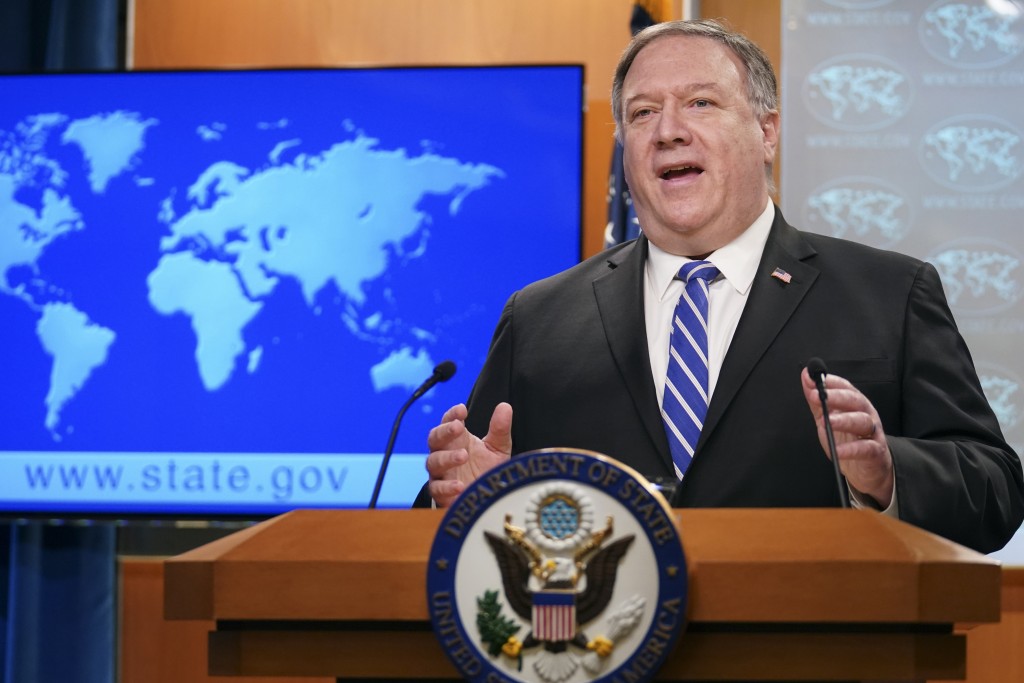 JERUSALEM (AP) — U.S. Secretary of State Mike Pompeo was in Israel on Wednesday for meetings with Prime Minister Benjamin Netanyahu and his new governing partner for talks that were expected to address Israel's plans to annex parts of the West Bank.

Pompeo landed in Tel Aviv early in the morning and proceeded directly to Jerusalem, receiving an exemption from Israel's mandatory two-week quarantine for arrivals due to the coronavirus outbreak. His visit is the first to Israel by any foreign official since January, before the country largely shut its borders to halt the spread of the pandemic.

Netanyahu and his new coalition partner, Blue and White party leader Benny Gantz, postponed the swearing-in of their government until Thursday to accommodate Pompeo's visit.

One of the key items on the agenda in Pompeo's talks with Netanyahu and Gantz was Israel’s stated intention to annex parts of the West Bank — a move certain to enrage the Palestinians and much of the Arab world as well as many of Israel's Western allies.

Ahead of the visit, Pompeo told the Israeli daily Israel Hayom on Tuesday that the meeting was important enough to justify flying to Israel for face-to-face talks despite the pandemic and that they would discuss efforts to keep Iran from obtaining nuclear weapons, the Trump administration’s Mideast plan, and efforts to combat the coronavirus.

He declined to say whether the administration supports unilateral annexation by Israel, saying he was coming to hear Netanyahu and Gantz’s perspectives on the matter. U.S. Ambassador David Friedman, an architect of the Trump administration's plan, has said Israel could begin annexing territory within weeks.

Netanyahu and Gantz struck a power-sharing deal last month after three parliamentary elections over the past year resulted in stalemate. Under the deal, Netanyahu would remain prime minister for the next 18 months, even as he goes on trial on charges of fraud, accepting bribes and breach of trust. Afterwards a year and a half, Gantz will serve as prime minister for 18 months.

The agreement also stipulates that Netanyahu can advance plans to annex Israeli settlements in the West Bank starting July 1, but that such a move must be coordinated with the U.S. while also taking regional stability and peace agreements into consideration.

Israeli hard-liners are eager to unilaterally redraw the Mideast map before November's U.S. presidential election. Annexation would also give President Donald Trump an accomplishment to shore up his pro-Israel base, particularly politically influential evangelical Christian voters. Wednesday's meeting could provide an indication of how far the administration is willing to allow Netanyahu to move.

Israel captured the West Bank, east Jerusalem and Gaza Strip in the 1967 Mideast war. The Palestinians seek these territories as part of a future independent state. In the decades since, Israel has built settlements in the West Bank and east Jerusalem that now house nearly 700,000 Israelis. Most of the international community considers these settlements a violation of international law and obstacles to peace.

In November, Pompeo stated that the administration no longer believed that Israel’s West Bank settlements were inconsistent with international law.

But Netanyahu's plans to annex occupied West Bank territory have drawn fierce criticism from across the Arab world. Earlier this week the United Arab Emirates, which has close, covert relations with Israel, voiced “deep concern” about annexation plans, while the Arab League has said annexation would be a “war crime.”

The Trump administration has said it will support the annexation of West Bank territory claimed by the Palestinians for an eventual state — as long as Israel agrees to enter peace talks with the Palestinians.

Under the Trump plan unveiled in January, the Palestinians would have limited statehood while Israel would annex some 30% of the West Bank. The Palestinians have rejected the plan.

Most of the international community opposes Israeli annexation, saying it would scuttle hopes of a two-state solution to the conflict.