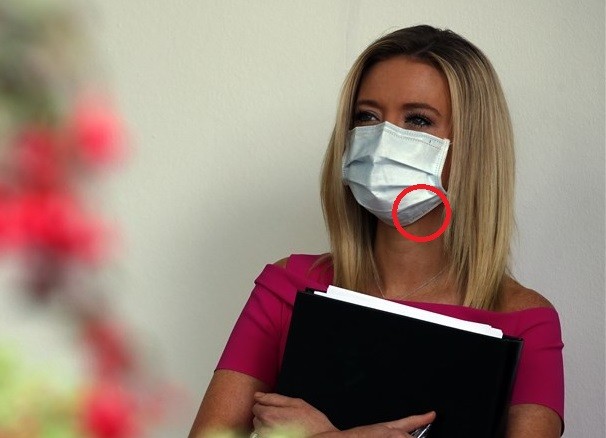 TAIPEI (Taiwan News) — Key White House figures were spotted on Monday (May 11) wearing "Made in Taiwan" masks after new coronavirus cases were reported among staff members.

On Monday, staffers in the West Wing were directed to wear masks after a military aid to the president and a spokeswoman for the vice president tested positive for the Wuhuan coronavirus (COVID-19) late last week. At a press conference held in the Rose Garden that same day, many White officials were suddenly seen wearing medical masks for the first time.

White House press secretary Kayleigh McEnany, National Security Adviser Robert O’Brien, and Senior Adviser Jared Kushner were all spotted wearing surgical masks with the label "Made in Taiwan" clearly visible on the lower-left corner. CNA cited a source in the White House as confirming that the masks worn by the officials were indeed medical masks donated by Taiwan to the U.S. As early as mid-March, despite White House claims that face masks were unnecessary at the time, a National Security Council team began scrambling to try to acquire medical masks knowing that they were essential to prevent the spread of the virus. However, they quickly realized there was not enough stock for all White House personnel.

On March 14, a senior NSC official reached out to Taiwan to see if it could provide the U.S. government with masks, reported the Washington Post. A few days later, Taiwan officially agreed to provide a goodwill donation of 500,000 medical masks for the Strategic National Stockpile.

Ten days later, the masks arrived in the U.S., with the majority going to the stockpile, while 3,600 masks were set aside for White House staff and officials, according to the report. On March 18, the two countries released a joint statement in which Taiwan pledged to donate 100,000 face masks per week to the U.S., while the U.S. is reserving materials for 300,000 hazmat suits for Taiwan. By mid-April, Taiwan announced that it would make a donation of 3.5 million masks to the United States, primarily for use by medical personnel. Made in Taiwan label on McEnany's mask. (AP photo)