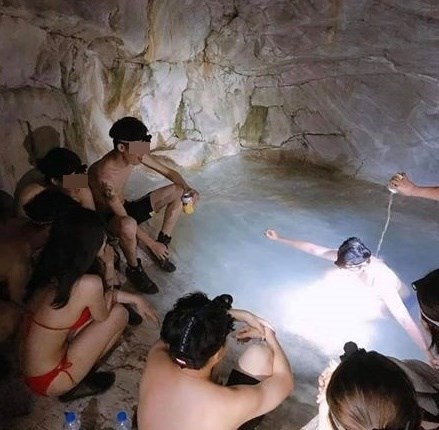 TAIPEI (Taiwan News) — A bed and breakfast (B&B) operator and more than 10 of his guests are facing fines for water pollution after their party photos at the closed Wenshan hot spring in Taroko National Park were posted to Facebook Monday (May 11), CNA reported.

The photos show more than 10 young men and women venturing into the Wenshen hot spring at night, washing their heads in the river, pouring water from a beer can, and lying inside a tunnel of the Central Cross-Island Highway. The boys wore swimming shorts, the girls bikinis.

The post attracted a lot of criticism from Facebook users who blamed the revelers for spoiling the natural ecology.

The B&B operator, surnamed Wang (王), defended the behavior of his guests in a telephone interview with CNA, saying that the beer can in the photo contained water, not beer. He added that it's a shame that the wonderful hidden destination in Hualien is closed and insisted that they were doing what visitors should do in order to have a nice trip.

Taroko National Park Administration Deputy Director Chang Teng-wen (張登文) said during an interview that the Wenshan hot spring is located in a national park and that the visitors' polluting of the water is punishable by a fine of NT$3,000 (US$100), according to the National Park Law; furthermore, he said, laying down on a highway is punishable by a fine of NT$300, according to the Road Traffic Management and Penalty Act.

The hot spring is located in an area prone to rock falls, which in the past have caused injuries. The Wenshan trail is open only before the north end of the suspension bridge.