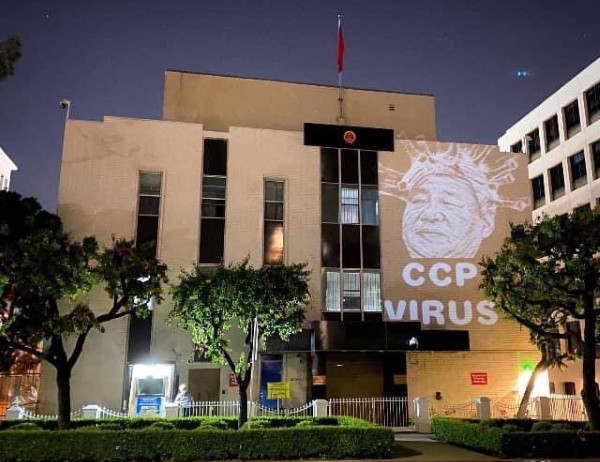 TAIPEI (Taiwan News) — In order to protest against China's handling of the Wuhan coronavirus (COVID-19) a Chinese dissident group projected an image of the "CCP Virus" on the Chinese consulate in Los Angeles on Sunday (May 10).

On Sunday evening, members of the Anti-Totalitarian Chinese Alliance (華人反極權聯盟) used a projector to impose defiant symbols on the Chinese consulate in Los Angeles. The image that received the most likes and shares on social media was an illustration of Chinese Chairman Xi Jinping (習近平) with spike proteins of the virus sprouting out of his head and the words "CCP Virus" below.

The founder of the group, Alston Kwan (關堯), posted a photo of the illustration on Twitter that evening. In addition to Xi's likeness, Kwan also projected the acronym "NMSL," which is short for the Mandarin insult "Your mother has died" (你媽死了).

The term has been used by Chinese trolls to put down any statement online deemed to be anti-China. However, it has also recently been used against Chinese trolls by Thai members of the "Milk Tea Alliance."

When posting the images on Twitter, Kwan wrote "Raising our country's prestige with hot words on the wall." The tweet gained 1,874 likes, 2,099 retweets, and 80 comments in less than 24 hours.

The Chinese consulate has yet to issue an official statement in response to the incident. Kwan previously used the consulate to post images of detained human rights activist Liu Xiaobo (劉曉波) and human rights lawyer Gao Zhisheng (高智晟).