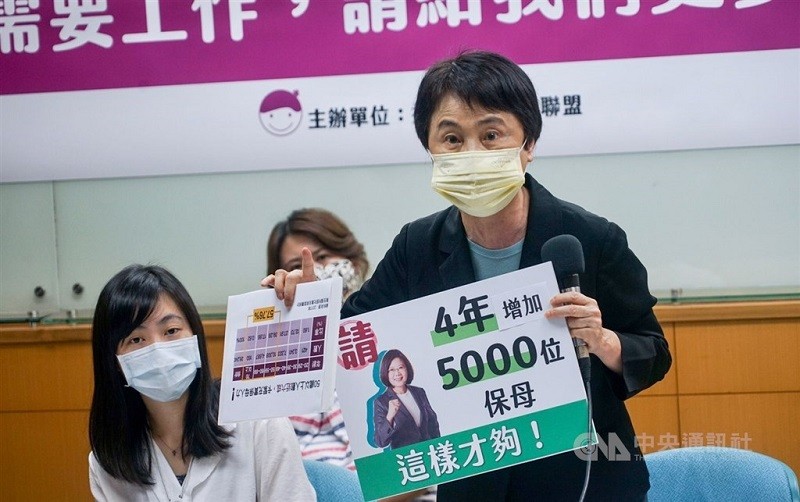 A civic group said Sunday that parents in Taiwan are making the difficult choice of giving up their jobs because they have no one to help take care of their babies, and this is also deterring couples from having children.

Meanwhile, childcare centers are overcrowded, accepting more than 90 children per day in some cases, as there are no government restrictions in that regard, according to the Childcare Policy Alliance (CPA), a group that is advocating for a national childcare policy.

These problems stem from the shortage of in-home childminders, who number about 26,000 nationwide and are mostly over the age of 50, the CPA said, citing its own data.

"Home-based nannies are not only aging but are in shortage," CPA coordinator Liu Yu-hsiu (劉毓秀) said at a Mother's Day press conference.

Older people, who normally would volunteer to babysit their grandchildren, are opting for later retirement because the government has reduced pensions, Liu said.

In such an environment, Taiwanese mothers are forced to stay at home to take care of their babies and do not wish to have more than one child, Liu said, noting that the average fertility rate in Taiwan in 2018 was 1.06 children per woman.

During the COVID-19 outbreak, parents would prefer to have an in-home childminder, and demand for such workers is expected to rise when the disease subsides, economic activity picks up, and more parents return to work, Liu said.

"The country will need to recruit 10,000 home-based nannies within the next four years to meet demand, as some 5,000 older ones retire, the alliance said in statement.

It called on the government to implement a national childcare program to support working mothers. "Taiwanese mothers need to work, and their children need to be taken care of," Liu said.

The CPA suggested that the government offer incentives to attract younger in-home childminders and that it increase the monthly childcare subsidy to parents from NT$6,000 (US$200) to NT$8,500 per child. Meanwhile, Minister without Portfolio Lo Ping-chen (羅秉成) told CNA on Sunday that about 40 percent of government employees in Taiwan need childminder services.

Premier Su Tseng-chang (蘇貞昌) has issued a directive to the relevant agencies to expedite a plan to expand nursery services for the children of government workers, Lo said.

Currently, there are 29 nurseries in various government departments in Taiwan, and another nine are expected to open before the end of the year, according to the Directorate-General of Personnel Administration.