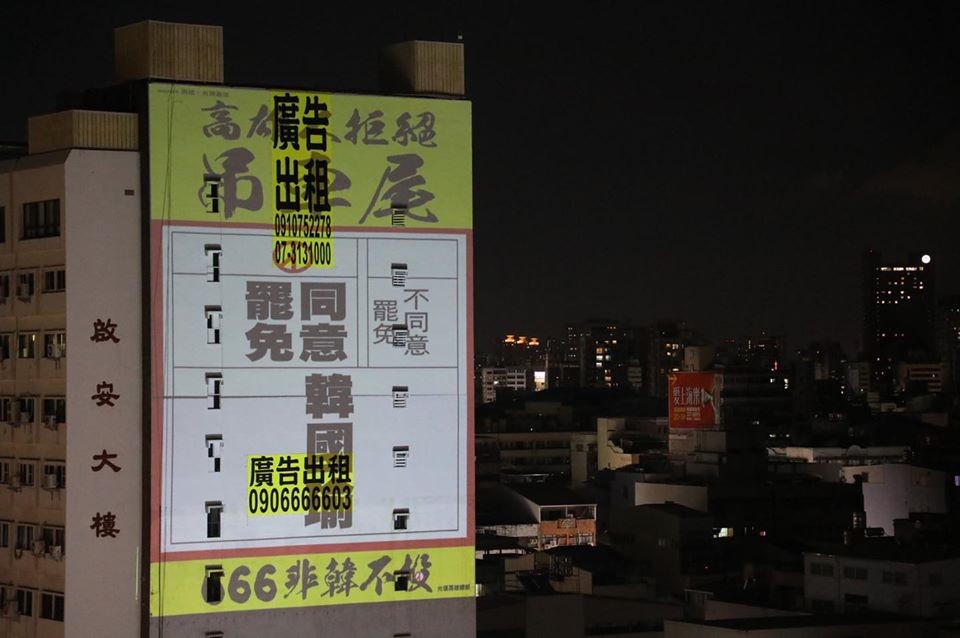 TAIPEI (Taiwan News) — An advertisement reminding voters to opt to recall Kaohsiung Mayor Han Kuo-yu (韓國瑜) appeared on a building in the city Wednesday (May 6).

On Wednesday evening, the group We Care Kaohsiung (Wecare高雄) projected its "unbreakable" billboard advertisement on the side of a building telling voters to select the "Recall Han Kuo-yu" option in the coming mayoral recall election slated for June 6. In response, the Kaohsiung City Government Public Work Bureau conceded that there were no laws on the books barring such digitally projected advertisements.

The group proudly posted photos of the advertisement on its Facebook page boasting that it was the first time a billboard advertisement has been projected on such a large scale in Taiwan's history. It thanked its supporters for their suggestions and said that such a sign had been in the works for some time, but ran into many obstacles.

We Care Kaohsiung said that it may only use this projection once, depending on whether Han continues to block advertisements showing the recall ballot. As stated in the ad, the group reiterated that Han has taken the city and its people to "dead last."

The group's founder Aaron Yin (尹立) was cited by Liberty Times as saying that previous physical billboard advertisements had been forcibly dismantled by city officials a few days ago, causing public outrage. He said that some supporters suggested digital projection as a solution, and so they contacted a vendor to try it out.

Yin said that the digital version was superimposed on a wall where the third advertisement had been torn down. He believes that the targeted, selective legal action taken against the signs by the city angered many members of the public.

He then revealed that the group may consider other similar digital advertisements in the near future.