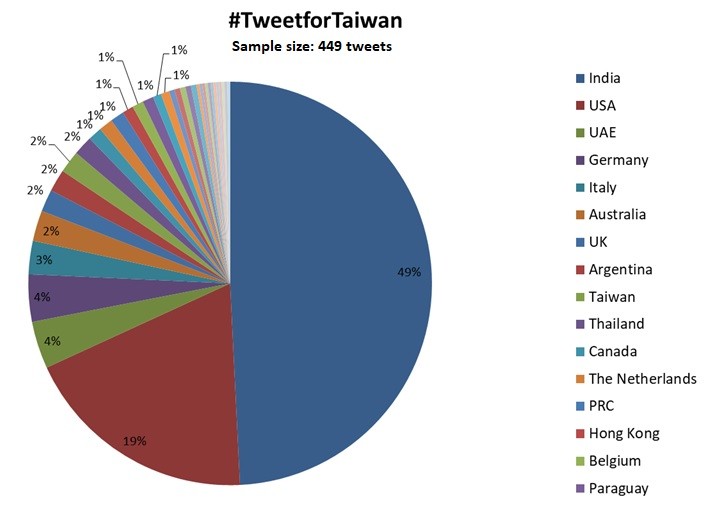 TAIPEI (Taiwan News) — An Indian financial consultant on Sunday (May 3) posted a pie chart showing that nearly half of all tweets in favor of Taiwan's accession to the World Health Assembly (WHA) were from India, following the creation of a hashtag meant to rally support for the proposal by the U.S. State Department.

On Saturday (May 2), the Bureau of International Organization Affairs Twitter account created the hashtag #TweetforTaiwan and called on the world to support Taiwan's inclusion in the upcoming WHA assembly to allow it to bring its "incredible expertise to the fight against COVID-19." It then stated that the world needs the help of Taiwan in the fight against the disease and called out the WHO, saying "It is time for Taiwan to be heard."

The next day, Amal Sinha, a financial consultant and editor at The Kootneeti, wrote a python script to access Twitter's API to compile data from 449 tweets that shared the hashtag and broke down the country of origin by percentages. As a result, the overwhelming majority of users tweeting in support of Taiwan were found to be from India, at 49 percent, followed by the U.S. at 19 percent.

Tied for third were the UAE and Germany at four percent each, with Sinha attributing much of the support in the UAE to Indians living there. Italy, which has been hard hit by the Wuhan coronavirus (COVID-19), took fifth at three percent, while Australia, which officially backs Taiwan's participation in the WHA, came in at two percent.

It is surprising that China shows up at all given its official stance against Taiwan's membership in the WHA and the fact that Twitter is blocked in the communist country. Given that Chinese users employ a VPN masking their country of origin, the actual percentage of Chinese users supporting Taiwan could be even higher.

After seeing the results, some netizens on Twitter joked that India should now join the viral "Milk Tea Alliance" with Thailand, Hong Kong, Taiwan, and Australia.

When Taiwan News asked Sinha if the percentages were still the same by Wednesday (May 6), he said that they are "largely holding up." Sinha said that he carried out an analysis of an even larger number of tweets (1,368) for May 1, finding similar results, with India still in the lead at 47 percent, followed by the U.S. at 20 percent, Taiwan at 11 percent, the UK at three percent, and Japan at two percent, rounding out the top five. Next, Sinha ran an analysis on 8,396 tweets between May 1 and May 5, and he found that India was still in the lead at 32 percent. However, Taiwan has now captured second place at 19 percent, followed by the U.S. at 15 percent, Hong Kong at 12 percent, and Thailand at three percent, lending credence to the concept of the "Milk Tea Alliance." As to why there are so many Indians tweeting for Taiwan, Sinha listed three reasons. First, he said that Indian has had issues with the Chinese Communist Party (CCP), especially since 1962, and "counts China as the top threat."

Second, since Mahatma Gandhi's time, a principal narrative has been fighting for rights, "So, a right denied to the country of Taiwan resonated with the people." Third, he said another reason is the fact that the Twitter user base in India is so high.

Join us to #TweetforTaiwan's inclusion at the upcoming World Health Assembly so #Taiwan can bring its incredible expertise to the fight against #Covid19. The world needs Taiwan in this fight! Tell @WHO that it is time for Taiwan to be heard.

Out of curiosity about the countries which are tweeting about #TweetforTaiwan, I did a quick data pull. Of the 449 tweets I analyzed, the results are in the graph. pic.twitter.com/9SagG8o5gz