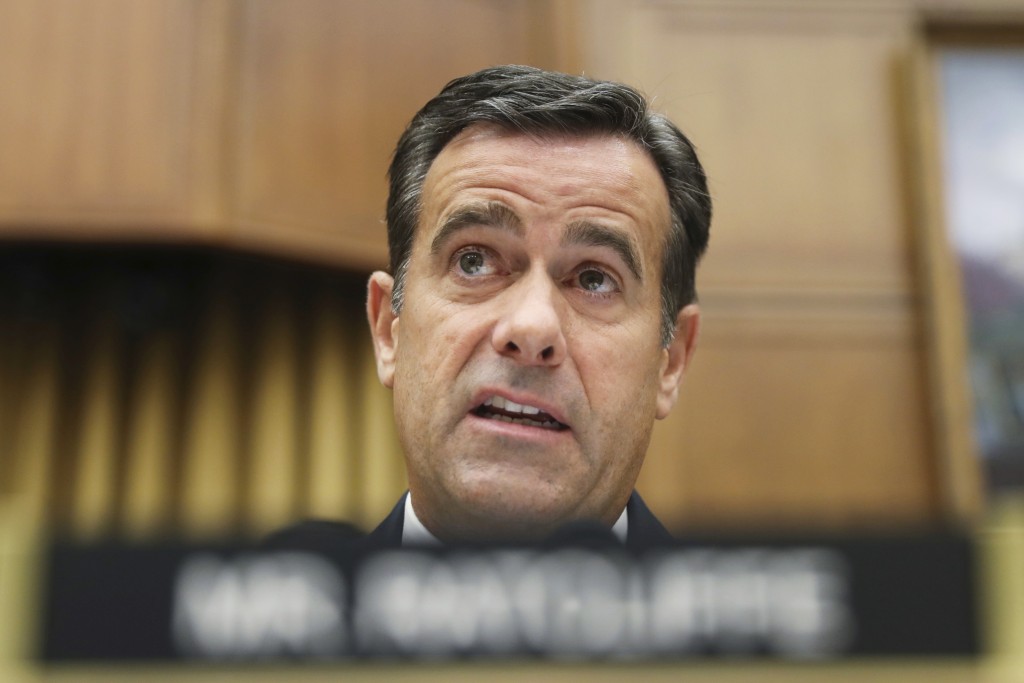 WASHINGTON (AP) — A Senate panel is considering Texas Rep. John Ratcliffe’s nomination for director of national intelligence, holding the in-person hearing amid President Donald Trump’s shakeup of the intelligence community and under drastic new distancing rules to protect Capitol Hill from the coronavirus.

Ratcliffe’s confirmation hearing in the Senate intelligence committee on Tuesday comes nine months after Trump first submitted and then abruptly withdrew the three-term lawmaker’s nomination. The August withdrawal came after bipartisan Senate criticism that Ratcliffe, one of the president’s most ardent defenders during the Russia investigations and Trump's impeachment, was unqualified to oversee 17 U.S. spy agencies.

Trump unexpectedly renominated Ratcliffe in February, and his chances at securing the job appear far better, though confirmation is still not guaranteed.

Tuesday's hearing will be a test of the Senate’s ability to conduct business safely with coronavirus cases still on the rise in the Washington area. Senate Majority Leader Mitch McConnell called his chamber back to work Monday, while House Speaker Nancy Pelosi, D-Calif., kept the House away, saying she had been advised by the Capitol physician that it was not yet safe to convene.

The intelligence panel’s hearing, along with others this week, was scheduled in one of the Senate’s largest meeting rooms, with precautions taken to ensure senators remained far apart during questioning. The public is still barred from the Capitol.

Ratcliffe's confirmation hearing has placed a renewed focus on the intelligence community, which has repeatedly warned this year that Russia is trying anew to interfere in the presidential race.

The questioning is expected to be contentious, with Democrats decrying what they say is Trump’s politicization of the intelligence agencies and his tendency to nominate officials who are loyal to him, regardless of expertise.

“Nowhere is the need for competent, apolitical leadership clearer than in the position of the Director of National Intelligence,” said Virginia Sen. Mark Warner, the top Democrat on the panel, in a statement ahead of the hearing. “Unfortunately, what we have seen from the president, ever since he came into office, is an unrelenting and undeserved political attack upon the professional women and men of our intelligence agencies.”

Warner said he was willing to give Ratcliffe the benefit of the doubt, but added, “I don’t see what has changed since last summer,” when his nomination was withdrawn.

Lawmakers are concerned about the turnover and have said they are eager for a permanent, Senate-confirmed replacement for Coats, who had won bipartisan acclaim. Some senators who previously seemed cool on Ratcliffe’s nomination appeared to soften.

Maine Sen. Susan Collins, a critical GOP swing vote on the panel, pointedly said last summer that she had never heard of Ratcliffe before he was nominated. But last week she said that she had spoken with him and concluded that he does have the experience “to meet the statutory standard” for the position.

“His knowledge of cybersecurity is particularly important given the challenges our country faces,” said Collins, who is in a tough re-election race this year. She added that she pressed Ratcliffe to “deliver objective analysis, regardless of the president’s views on an intelligence issue.”

The Maine Republican’s supportive statement indicates that Ratcliffe could be easily approved by the panel and then confirmed on the floor. But he will first have to face rigorous questioning at the hearing, including from Republicans, on his thoughts on Atkinson’s dismissal and on the work of the U.S. intelligence community, which Trump has repeatedly and openly criticized.

He will also be questioned on his experience and his resume, after news reports last year suggested that he had embellished some of his accomplishments as a federal prosecutor. Before being elected to Congress in 2014, Ratcliffe was mayor of Heath, Texas, and a U.S. attorney in the Eastern District of Texas.

Ratcliffe, who sits on the House intelligence, judiciary and ethics committees, has been a fierce defender of the president. He forcefully questioned former special counsel Robert Mueller last summer when he testified about his investigation into Russian interference in the 2016 election.

He was also a member of Trump’s impeachment advisory team last fall and aggressively questioned witnesses during House impeachment hearings.

After the Democratic-controlled House voted to impeach Trump, Ratcliffe said, “This is the thinnest, fastest and weakest impeachment our country has ever seen.”