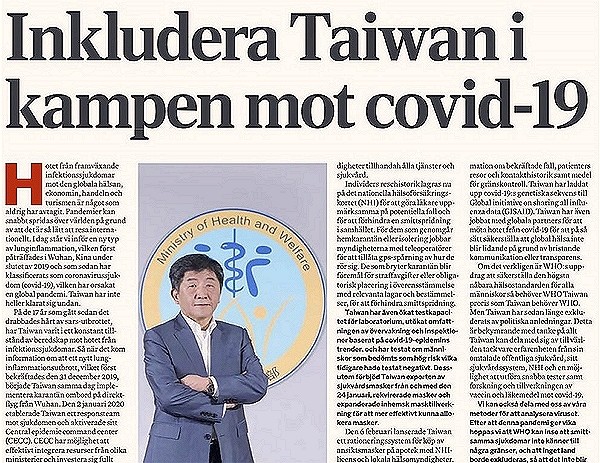 In the letter, titled "Include Taiwan in the fight against COVID-19," Chen pointed out that Taiwan is one of the countries that have effectively curbed the spread of the coronavirus (COVID-19) and minimized their death toll. He mentioned that the SARS outbreak in 2003 taught Taiwan a lesson, leading to the establishment of the island nation's Central Epidemic Command Center (CECC), which has proven to be critical in the coronavirus battle.

Chen exclaimed that "Diseases know no bounds" and said it is important for Taiwan to be admitted into the WHO in order to share its experiences and knowledge about the ongoing pandemic. He added that Taiwan is very willing to cooperate with all countries and fulfill its duty as a member of the global community.

The health minister further stated that Taiwan should not be excluded from global health conversations and urged the WHO to consider granting the East Asian nation permission to participate in all important meetings. He added that there should be no gap in global health security due to political reasons, stressing the WHO should "leave no one behind."

Chen said he hoped the WHO would stick to its mission of "ensuring the highest achievable health standard for all people" as well as acknowledge Taiwan's contributions to the world. He also promised that the Taiwanese government would continue to work towards securing the fundamental human right to health for citizens of every country.

Since being published as a full-page story, Chen's appeal letter has drawn much attention among both Taiwanese and Swedish readers. In addition, a number of Taiwanese netizens have expressed their respect for Chen and admiration for his leadership amid the crisis, reported Now News.