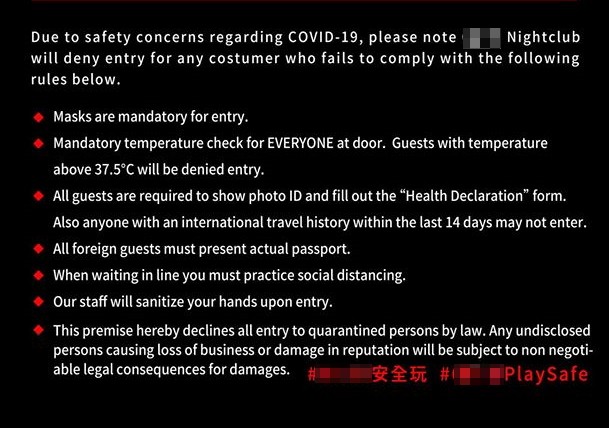 TAIPEI (Taiwan News) — Another Taiwanese nightclub has been found to have a passport policy that discriminates against foreigners while also hosting a dance troupe that performs blackface.

On April 24, a nightclub located on Zhongxiao East Road Section 4 in Taipei's Da'an District announced its new Wuhan coronavirus (COVID-19) prevention measures on its Instagram and Facebook pages. The announcement states that masks are mandatory for all customers and that the club would not accept anyone with a temperature over 37.5 degrees Celsius.

It also says that all guests must present a photo ID and fill out a "Health Declaration" form. It adds that anyone who has traveled abroad within the past 14 days will be denied entry.

The fourth and most controversial item on the list requires all "foreign guests" to present an "actual passport" before entering. However, the notice does not state any similar requirement for Taiwanese citizens, instead leaving it to some sort of honor code.

The notice also does not give an explanation of how foreign e-gate users could prove their last entry date. It goes on to ask people waiting in line to practice social distancing but does not say anything about continuing such distancing once inside the club.

The announcement closes by stating that the establishment will refuse entry to anyone required to be under quarantine. It then threatens legal action against any quarantine violators who cause loss of business or damage in reputation to the club. The continuation of the discriminatory policy is odd given that Taiwan has gone 21 days without a single local case of the coronavirus. On March 19, Taiwan banned all foreign visitors, with few exceptions, and the ban is still in place to this day.

The last foreign national to be diagnosed with the disease in Taiwan was case No. 229, an American male in his 30s who returned from the U.S. on March 25. Since that day, 100 percent of Taiwan's domestic and imported cases have been Taiwanese.

Everyone arriving in Taiwan from abroad must undergo 14 days of home quarantine. If they are already presenting symptoms, do not have the means pay to stay in a hotel for two weeks, or have high-risk family members, they must enter a government-provided quarantine center.

To add insult to injury, the club on May 1 posted an image of a dance group, Luxy Boyz, performing in blackface. A video of them wearing blackface while performing the Ghanian "coffin dance" surfaced on TikTok on May 2. Although cases of discrimination have been far fewer and less extreme than what has been seen in recent weeks in China, where there have been forced evictions and unwarranted quarantines of African residents in Guangzhou, there have been several other reports of discriminatory policies at restaurants, bars, temples, nightclubs, and Airbnb rentals in Taiwan.

The nightclub's marketing director notified Taiwan News that the passport only policy "was a mistake" and has been discontinued. When asked for the explanation why specifically passports were required, the director said: "At the time I was only thinking about traveling foreigners, but forgot that we have many expats who have lived in Taiwan for a long time and have their ARCs."

Foreigners wishing to enter the club now have the option of using their passport, ARC, or APRC for identification. It should be noted that Immigration Act Article 28 defines resident certificates as legal, valid IDs and Article 62 stipulates that: "No one may discriminate against people living in Taiwan based on factors such as nationality, race, color, class, place of birth, etc."