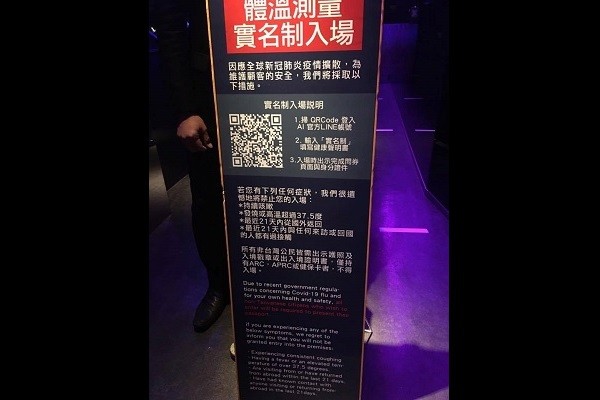 TAIPEI (Taiwan News) — A photo of a sign announcing a new discriminatory policy at a popular nightclub in Taipei City surfaced on Sunday (May 3), after a group of foreigners was denied entry because they had not brought their passports, while Taiwanese were exempt from the requirement.

On Saturday evening (May 2), a sign appeared at the entrance to a nightclub on Songshou Road in Taipei's Xinyi District announcing a new policy to screen guests for symptoms and check their travel history to prevent the spread of the Wuhan coronavirus (COVID-19). In red text directed solely at "non-Taiwanese citizens" wishing to enter the club, the announcement stated that it is now requiring all foreign nationals to present a passport with the most recent entry stamp before they will be allowed inside.

However, the notice did not state any similar requirement for Taiwanese citizens, instead leaving it to some sort of honor code on their part. It also did not give an explanation of how foreign e-gate users could prove their last entry date.

The notice also stated the club would not accept customers who have a constant cough, have a temperature over 37.5 degrees Celsius, or who have returned from abroad within the past 21 days, or come into contact with a person who has. The timing of the policy is odd given that Taiwan has gone 21 days without a single local case of the coronavirus. On March 19, Taiwan banned all foreign visitors, with few exceptions, and the ban is still in place to this day.

The last foreign national to be diagnosed with the disease in Taiwan was case No. 229, an American male in his 30s returning from the U.S. on March 25. Since that day, 100 percent of Taiwan's domestic and imported cases have been Taiwanese.

All passengers arriving in Taiwan from abroad must undergo 14 weeks of home quarantine. If they are already presenting symptoms, do not have the means to stay in a hotel for 14 days, or have family members at high risk, they must enter a government-provided quarantine center.

At noon on Sunday, a member of the Facebook group Taiwan Foreigner Legal Alliance posted a photo of the club's sign on the group. She wrote that she and her friends had been barred from entering the club the previous night, as they had not had their passports with them.

She said that the doorman told them their Alien Residence Certificates (ARCs) were not sufficient to enter. She complained that the policy is unfair because it only applies to foreigners and not Taiwanese, who are still allowed to go in showing only their Taiwan ID cards.

She then asked the legal group: "Isn’t it discrimination towards foreigners holding an ARC or APRC?" One member responded by writing: "Because they ask foreigners to show passports but Taiwanese do not need, it is RACISM."

One user retorted: "their land their law, nothing wrong with it and the bar is privately owned... no need for Racism argument." However, another member of the group countered that by writing: "EVERY bar or restaurant that has used the 'new government regulations' line has been unable to provide any evidence of new regulations."

An astute member of the group then pointed out that Article 62 of the current Immigration Law stipulates that: "No one may discriminate against people living in Taiwan based on factors such as nationality, race, color, class, place of birth, etc."

It should be noted that Immigration Act Article 28 defines resident certificates as legal, valid IDs and Article 62 stipulates that: "No one may discriminate against people living in Taiwan based on factors such as nationality, race, color, class, place of birth, etc."