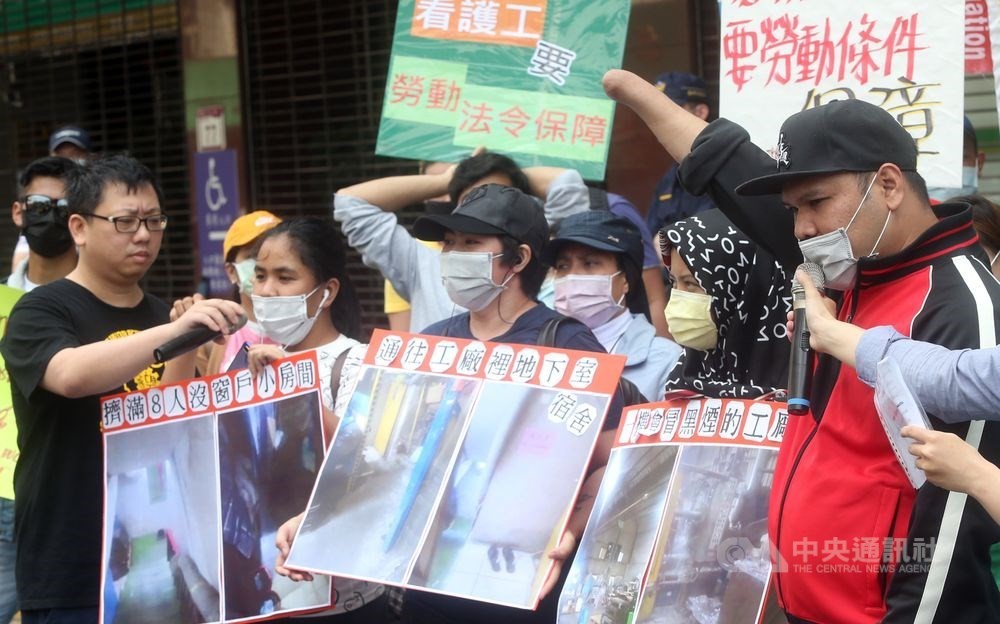 A coalition of migrant rights groups staged a rally in Taipei on Sunday, calling for Taiwan's labor ministry to improve migrant workers' rights and safety.

About 50 people, including migrant workers and the representatives of non-governmental organizations (NGOs), gathered outside the Ministry of Labor (MOL) to call for rules stipulating that dormitories must be located away from work sites in the interest of safety.

A Filipino, identified only as Arturo, said that during the five years he worked at a metal production factory in Taoyuan, he was housed in the basement of the factory building with seven other coworkers.

The cramped dorm space did not have proper ventilation and smelled of burning metal from the factory every morning, he said, adding that he and his workmates were afraid to sleep at night because they were worried about being trapped if a fire broke out.

"There were no fire extinguishers and the stairs that led to the exit were very steep and narrow," said Arturo, whose right hand was severed in a work accident last year.

Explaining the importance of separation, Hsu Wei-tung (許惟棟) of the Migrants Empowerment Network in Taiwan cited three incidents in recent years, in which 11 migrant workers and six firefighters died in blazes that broke out at factories with dorms on the premises.

In the most recent incident, three Vietnamese workers, who were housed in a dorm on the second floor of a metal manufacturing plant in Taichung, died when the factory went up in flames on March 22.

"Their lives were lost because the dorm was not separate from the work place, so when the fire broke out in the factory, the dorm also went up in flames," said Hsu, urging the MOL to ensure dorms and factories are separate for the safety's sake.

Meanwhile, an Indonesian caregiver, identified as Santi, called for the government to implement better rights for migrant caregivers because they are not protected under the Labor Standards Act.

Her pay is relatively low compared to migrant factory workers who work eight hours and receive NT$23,800, she argued.

"I work everyday from 6 a.m. to 10 p.m. and if the elderly patient I look after needs me after that, I still have to continue to work without rest," Santi lamented.

The migrant workers at the rally, mainly from Indonesia, Vietnam and the Philippines, along with Taiwanese supporters, shouted slogans, and held up banners and placards in support of the demands presented to the MOL.

According to the ministry, there are plans to amend the law to make it mandatory for employers of migrant workers to declare if there are any dangerous substances at work sites; and that groups who have concerns or suggestions will be invited to discuss the matter with related government agencies in the near future.

With regards to migrant caregivers and domestic workers, their work contracts must state that the worker will be given enough rest time, such as one day off every seven days of work, according to the MOL.

The terms of salaries have already been discussed with the government in the workers' country of origin, the ministry said.

As of the end of March there were 718,531 migrant workers in Taiwan, with 455,580 working in productive industries and 262,951 in the social welfare sector, according to MOL statistics.