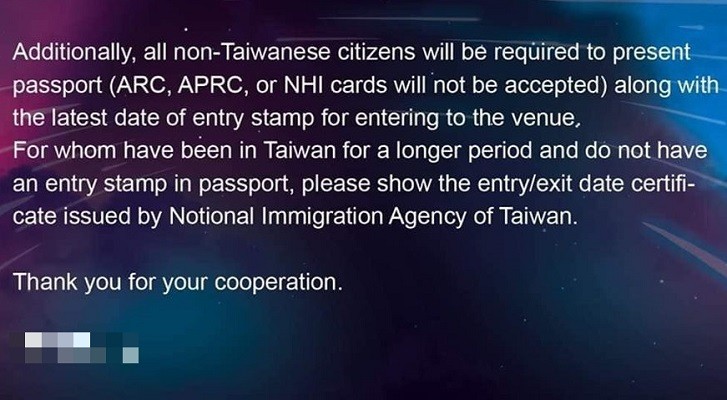 TAIPEI (Taiwan News) — A nightclub in Taichung City on Thursday (April 30) announced a new policy that foreign residents are complaining is discriminatory, as it only requires foreigners to provide proof they have been in the country longer than 14 days, while not asking Taiwanese to do the same.

On its foreign relations Facebook page, a nightclub in Taichung's Nantun District on Thursday evening announced a new policy to screen guests for symptoms and travel history to prevent the spread of the Wuhan coronavirus (COVID-19). The announcement stated the club would not accept customers who have a constant cough, a fever or temperature over 37.5 degrees Celsius, and have returned from abroad within 14 days, or come into contact with a person who has.

It then listed an additional condition directed solely at "non-Taiwanese citizens" wishing to enter the club. The club is now requiring all foreign nationals to present a passport with the most recent entry stamp, before they will be allowed inside. Foreign residents who have not recently traveled abroad are required to present an entry/exit date certificate issued by the National Immigration Agency. However, the notice does not state any similar requirement for Taiwanese citizens, instead leaving it to some sort of honor code on their part.

The timing of the policy is odd given that Taiwan has gone 21 days without a single local case of the coronavirus. On March 19, Taiwan banned all foreign visitors, with few exceptions, and the ban is still in place to this day.

The last time a foreign national was diagnosed with the disease in Taiwan was case No. 229, an American male in his 30s returning from the U.S, on March 25. Since that day, 100 percent of Taiwan's domestic and imported cases have been Taiwanese.

All people arriving in Taiwan from abroad must undergo 14 weeks of home quarantine. If they are already presenting symptoms, do not have the means pay to stay in a hotel for 14 days, or have family members at high risk, they must enter a government-provided quarantine center.

That same evening, the administrator of the Facebook Group Taichung Info Exchange posted the club's announcement on the group. She then included screenshots of her correspondence with the foreign relations representative for the club. She asked the representative why foreigners are required to provide proof of their travel history while Taiwanese are not. The representative refused to answer the question and exhorted her to "not bring up some discrimination subject here," and glibly welcomed "whoever wants to drink and have fun."

Out of Taiwan's 432 confirmed cases of coronavirus, only 15 are foreign nationals, including three Chinese citizens from Wuhan, China. The nightclub has yet to respond to two requests by Taiwan News to explain why the travel document policy is only directed at foreign nationals.