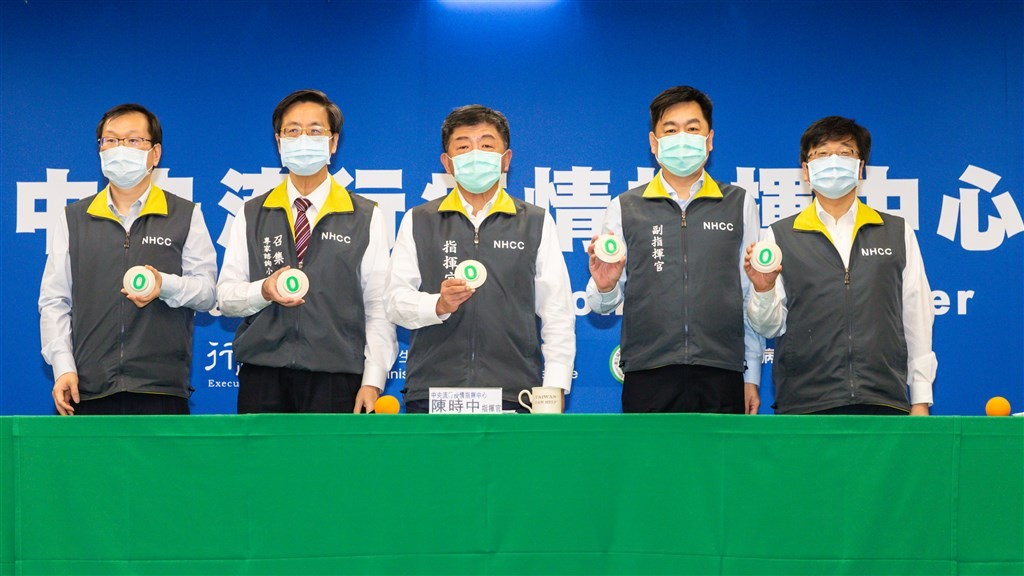 TAIPEI (Taiwan News) — Taiwan's Central Epidemic Command Center (CECC) on Thursday (April 30) announced that there were no new cases of Wuhan coronavirus (COVID-19) for a record fifth day in a row.

During his daily press conference on Thursday afternoon, Chen announced no new cases of the virus. This marks the 18th day that the country has not reported a local case and the first time that zero cases (either imported or domestic) have been reported five days in a row.

Five members of the CECC team celebrated by holding up coffee cup lids with the number zero on the top. The lids came from coffee mugs with "Taiwan Can Help" printed on them. CECC team members hold up lids with "0" on them. (YouTube, CDC screenshot)

Chen said that of the 31 sailors in the "Goodwill Fleet" (敦睦, Dunmu) cluster, 1,996 contacts have been traced by the health department. Among those, 585 are undergoing home isolation, while 1,411 have implemented self-health management.

Thus far, 480 of these contacts have been tested for the virus and 465 have tested negative. Since the outbreak began, Taiwan has carried out 62,844 tests for COVID-19, with 61,354 coming back negative.

Out of Taiwan's 429 total cases, 343 were imported, 55 were local, and 31 came from the Goodwill Fleet. Up until now, only six have succumbed to the disease, while 322 have been released from hospital isolation. As for the Goodwill Fleet cluster, the CECC will continue to trace the infected sailors' public movements after disembarking from their ships, and it will publish them online. Chen reminded the public that if they were at the same places at the same time as the confirmed cases, they should be practicing self-health management until May 2 and wear a mask when going out.

Those who feel unwell are advised to call the toll-free disease prevention hotline at 1922. The CECC also recommends that when seeking medical attention, patients should proactively inform doctors of their travel history and every person they have recently come into contact with.