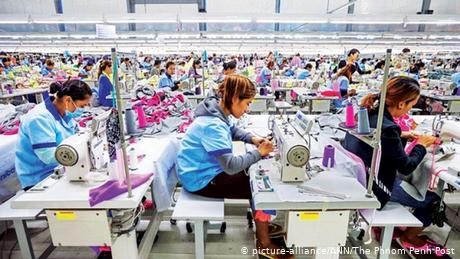 Hundreds of garment factories in Cambodia and elsewhere in Asia are facing serious financial problems because clothing brands have either canceled their orders or stopped placing new ones over the past several weeks. The brands say they have no other option, because the demand for clothes has decreased significantly now that many stores in the West are closed due to the coronavirus pandemic.

In Cambodia alone up to 130 factories have asked the country's Labor Ministry for permission to suspend their operations entirely or partly. With about 750,000 workers, the garment industry is the biggest employer in the Southeast Asian nation. Around 100,000 Cambodian workers have recently lost their jobs, either permanently or temporarily. This number is likely to increase in the weeks and months to come.

Chhouk Sarann, 26, is one of the many newly unemployed Cambodians. She got fired from her job in a garment factory in Phnom Penh after she defied a travel ban that was implemented by the government to stop the spread of COVID-19. "When I got back to the factory a few days later, I was told that I should resign. When I didn't do that, they told me that I'm no longer employed at the factory," Sarann told DW at a small coffee shop in Phnom Penh.

Losing her job puts the mother of a 5-year-old kid in a challenging situation. Sarann normally earns between $200 and $250 (€184 and €230) per month. "It's going to be very difficult to be without income. My mother and my child depend on the money I send them every month. And I just got a $5,000 loan from the bank so that my husband can fix up old cars," she said.

Read more: What you need to know about the coronavirus

During normal times, an experienced seamstress as Sarann should be able to easily find a new job. But many Cambodian factories are currently struggling to survive. Instead of recruiting new staff, they are suspending them.

Khun Tharo, a program coordinator at the Center for Alliance of Labor and Human Rights (CENTRAL), said there are "serious questions over the long-term financial viability of some factories."

"We know some factories are owned by massive multinational companies who will probably be able to survive, but when we start looking at some of the smaller factories and at subcontractor factories, which don't have the financial resources of these bigger companies, it paints a very concerning picture of the near future of the industry."

The Garment Manufacturers Association of Cambodia (GMAC), which represents hundreds of employers, has also said that some factories may not survive the rapidly growing crisis, largely because the margins on which these companies operate are small.

The factories are pushed into a difficult position by some of the world's biggest clothing brands. At least 14 brands have canceled their orders and either refuse to pay for the orders or demand a discount, according to the Worker Rights Consortium, an organization that monitors factories worldwide.

Following fierce criticism, some of these brands recently announced that they are working to find a solution for the factories and their workers.

The mass cancelations of orders hit not only Cambodian factories, but also those elsewhere in Asia. In Bangladesh over 1 million people could lose their job, in Myanmar at least 70,000 jobs are at stake, according to Human Rights Watch. And in Vietnam, the Vietnam Textile & Apparel Association expects exports to shrink by 15%.

In Cambodia, the crisis poses a huge challenge for the government. Social security is scarce in the impoverished nation and the resources to bail out factories are limited. The authorities and the factories have agreed that workers who are suspended will receive $70 per month, which is less than 40% of the country's minimum wage.

It will push people back into poverty, warns Khun Tharo of CENTRAL. "The poverty line for workers in Phnom Penh and other urban areas is $128 and $88 respectively," he says. "Landlords continue to demand monthly rents and with utilities this $70 can be entirely or almost entirely spent on accommodation costs alone, without accounting for food."

Finding new jobs will be a tough challenge for the over 100,000 Cambodian garment factory workers who are now left without work. Much of the country's economy has been affected by the outbreak of COVID-19, with many businesses in the travel and entertainment industry closed as well.

"The answer for Cambodians who can't find work in Cambodia has always been to look for work overseas, but with international borders closed and much of the world facing the prospect of an economic depression, this is not an option that will realistically be open to these workers," Tharo told DW.

Seamstress Chhouk Sarann said she will still do her best to find a new job. "But I haven't seen any job advertisement recently."