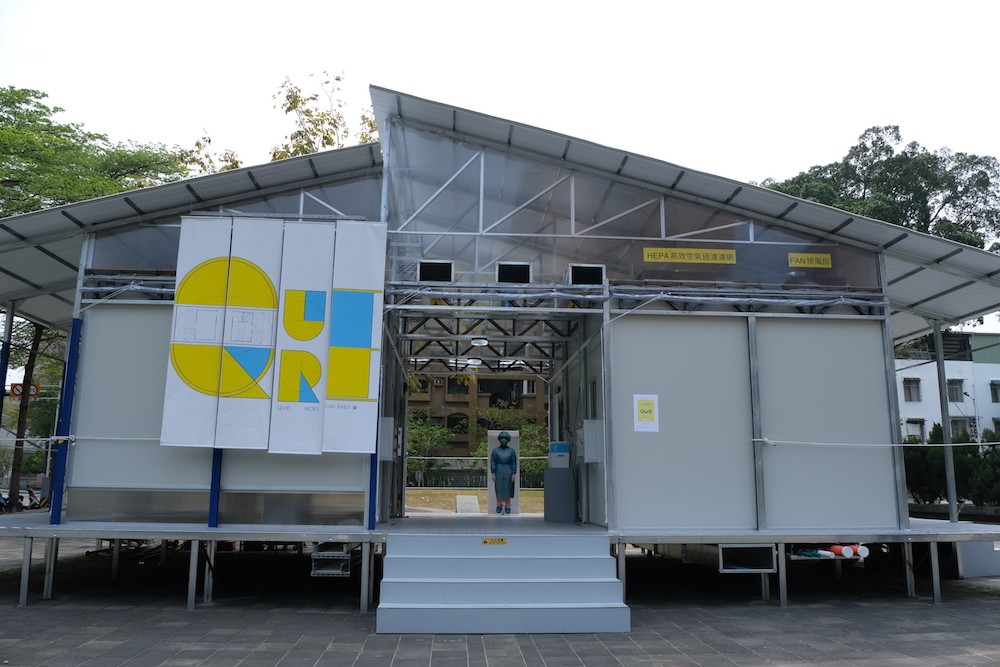 TAINAN (Taiwan News) — Tainan-based National Cheng Kung University (NCKU) has unveiled a project to build the island’s first deployable quarantine hospital to prepare for the potential coronavirus (COVID-19) outbreak, which has swept throughout the entire world since late last year.

“We are very proud to declare that we are the first in the world to have presented a readily deployable temporary quarantine hospital with innovation and human needs incorporated into the design,” remarked NCKU President Jenny Su (蘇慧貞) at a press conference on Tuesday morning (April 28).

The design of the quarantine hospital reflects the government’s proactive, technology-based disease prevention efforts, which have been widely recognized by international media, she observed. The project will be made available to the world as an open-source design, with all related documents and graphics downloadable in both Chinese and English on the NCKU website, said Su. “The quarantine hospital is not perfect, but it is ready to be used in every corner around the world,” she stated, going on to say that the design can be continuously improved upon by other parties according to their needs.

The university will keep the platform open and looks forward to input that can be used to build upon the foundations of the project, Su said. She added that the project was part of the university’s efforts to serve the world in times of emergency.

NCKU Hospital has been using digitalized quarantine processes and artificial intelligence-assisted diagnosis as part of its coronavirus response, according to the hospital’s Superintendent Shen Meng-ru (沈孟儒). In terms of tackling the pandemic, he said, “We’ve been thinking about sharing some good stuff with other people," explaining it was this original idea that gave birth to the project. According to the superintendent, 12 out of 16, or 75 percent, of confirmed coronavirus cases in Tainan have been detected and treated at NCKU Hospital. In the past three months, it has mobilized approximately 3,000 medical workers and quarantined roughly 1,500 of the city’s people.

The project, titled the Quarantine Unit for Recovery, Emergency, and Ecology, or simply QurE, was aimed to build a deployable quarantine hospital that meets the standards of the authorities’ coronavirus response while also reaching its goal of sustainable development.

Led by the NCKU president, the team developed a full-size prototype of a quarantine unit on the school campus within two weeks, and the design is said to have overcome some of the drawbacks faced by mobile cabin hospitals being used in various countries in the fight against the coronavirus.

“There is already a lot of prototyping around the world,” said Lee Chin-wei (李金威), an associate partner of Bio-architecture Formosana, which is also part of the project. “What is good about our project is that we tried to incorporate more humane elements into our design,” he said. The quarantine unit can be replicated and extended to form a large compound where medical workers will spend long periods working in stifling protective clothing. “We tried to add some natural elements — natural light, for example. Otherwise [the compound] will be a long dark corridor,” said Lee.

Each quarantine unit is built to function as a negative-pressure isolation ward, which will greatly improve the safety of medical workers as they treat patients. “Basically, we have done a lot of sealing. Every door can be sealed to block the flow of air,” said Lee, who acknowledged that it was also the main challenge of the project, inspired in part by temporary lodges used on construction sites as well as in laboratories. The quarantine unit can be easily assembled and quickly deployed to different locations thanks to its prefabricated, modularized design and locally available materials, according to Lee. It is estimated that a single unit can be set up within three days and put to use within one week.

The design has to be sustainable and allow materials to be sourced locally, said Lee. “After you finishing using it, it can be dismantled and used for other purposes.”

“We have seen frontline medical workers in Europe, the U.S., and China being infected by the coronavirus while treating patients,” observed Tainan City Mayor Huang Wei-cher (黃偉哲). Ensuring the health and safety of medical workers as they carry out their tasks is of the utmost interest for all, said the mayor, who admitted to being impressed by the university’s solution.