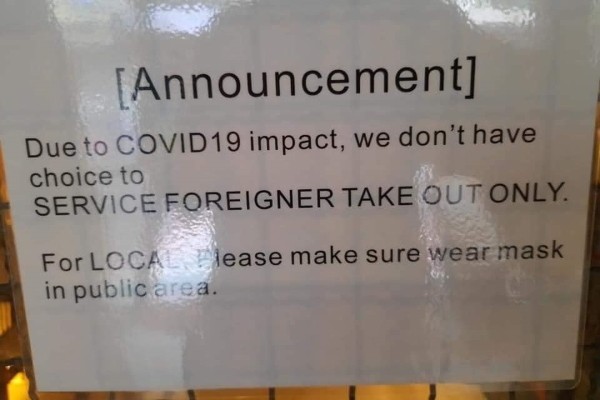 TAIPEI (Taiwan News) — Foreign residents in Taiwan have been angered by the appearance of a sign at a Taipei restaurant that only allows foreigners to order takeout, while Taiwanese are allowed to dine inside.

On Monday (April 27), a member of the Facebook group Foreigners Society in Taiwan shared a photo of a discriminatory sign posted at an Italian restaurant and cat cafe in Taipei's Xinyi District. The sign states that due to the impact of the Wuhan coronavirus (COVID-19), foreigners are only allowed to order food to go, while "locals" are allowed to enter on the condition that they wear face masks.

The person who posted the image said that the photo had been taken by a friend when they visited the restaurant on Sunday (April 26). He said he was so upset by the restaurant's discriminatory policy that he threatened to call the police.

The staff then called the eatery's owner, who talked to the man and eventually allowed him to enter. The man who uploaded the photo described the sign as "absolutely wrong, ignorant, xenophobic."

The man then reasoned that all of humanity is at risk during the coronavirus crisis, foreign and Taiwanese alike. He argued that everyone should wear a mask and order takeout and that if the restaurant was really so concerned about the safety of its workers, it should shut down.

When asked for an explanation for the sign by Taiwan News, the restaurant claimed it had been created weeks ago because some customers from abroad had allegedly recently returned from overseas without staying under quarantine for the full 14 days as required. It stated that it posted the notice in response.

The restaurant wrote that the sign had been meant to enforce "strict rules" to "protect public health," but it acknowledged it had been made without careful consideration and used a poor choice of English words, causing "foreign friends to misunderstand." The management then wrote that it has removed the announcement and again apologized to "everyone."

That same day, the restaurant posted an apology on its Facebook page, receiving a mixed reaction from followers. One person alleged that the policy was racist and ineffective, as many Taiwanese and other Asians who had recently traveled abroad would be allowed in.

Another person pointed out that the majority of the imported cases in Taiwan are actually Taiwanese citizens returning from countries hard-hit by the pandemic. Yet another said the restaurant's excuse of "bad English" was just an excuse to cover up its racist policy.

Some accepted the explanation, with one person thanking them for their apology and saying that they planned on visiting their store. Another called on the public to give them another chance given the "extreme period" that people are living in.

Although cases of discrimination have been far fewer and less extreme than has been seen in recent weeks in China, such as forced evictions and unwarranted quarantines of African residents in Guangzhou, there have been a few other incidents of discriminatory policies at restaurants, bars, and Airbnb rentals reported in Taiwan.

The majority of these establishments have changed their policies and apologized after receiving complaints from the foreign community, but some have stubbornly refused to end discriminatory policies, such as this Yakiniku restaurant and this Bistro, both of which still require foreigners to present their passports with the most recent entry stamp clearly visible.