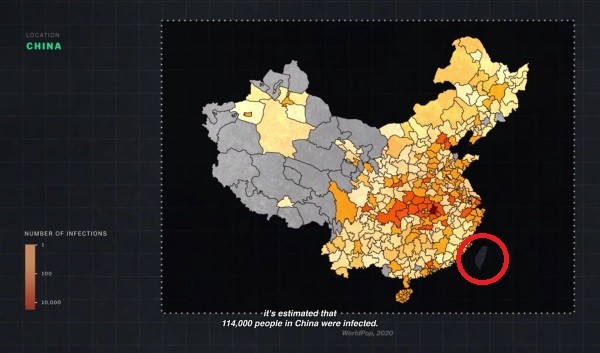 TAIPEI (Taiwan News) — Netflix has drawn the ire of netizens in Taiwan after it included their country on a map of China in its latest documentary series about the Wuhan coronavirus (COVID-19).

On April 26, Netflix released a documentary on the COVID-19 pandemic titled "Coronavirus, Explained," which is produced by Vox Media, Inc. and narrated by J.K. Simmons. In the first episode, titled "This Pandemic," the video flashes a map of China showing an estimate of the actual number of people in the communist country infected with the coronavirus — a map that includes Taiwan.

The map, which surfaces at the 22:20 mark and appears to be from WorldPop, uses shades of orange to indicate the number of infections in various locations around China, with areas not reporting any cases colored gray. Strangely, Taiwan is also gray, while all other countries are blacked out, apparently indicating that Taiwan is Chinese territory.

In what appears to be a strange compromise between Beijing and Taipei's stances on Taiwan's status, the country is so dark that it is barely visible. In one interpretation, the uniquely dark shading seems to imply a special status for Taiwan while at the same time still including it as part of China.

One user of the Taiwan section of social media site Reddit posted a screen capture of the map early Tuesday morning (April 28). Within 10 hours, it received 723 upvotes and 135 angry comments:

"Such bulls***. So obvious that it's there in a darker color so that you can only really see it if you're looking and they can say 'well we differentiated it a bit', and they can't get Chinese people/government complaints about it."

"Why you kowtowing to China when you’re not in the China market and probably never will [be] Netflix?"

"Because it's not about the people in China- it's about changing Westerners beliefs about what China is. If poorly-informed people see the same thing over and over, presented as truth, they will believe it."

"Taiwan runs differently and has demonstrated a vastly different response to the Coronavirus. Even ignoring the many valid other reasons to consider it a different entity than China, this in itself deserves the recognition."

Netflix has yet to respond to Taiwan News' request for comment.