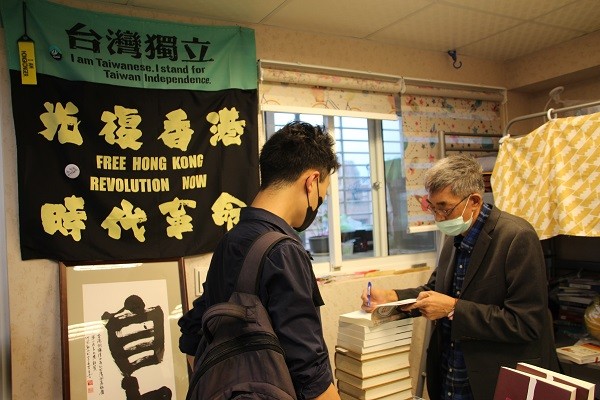 TAIPEI (Taiwan News) — Taiwan Causeway Bay Books (台灣銅鑼灣書店) saw enormous footfall on its opening day (April 25) in Taipei, marking a new start for a bookstore that was ruthlessly persecuted by the Chinese Communist Party (CCP) when it existed in Hong Kong.

Inaugurated by bouquets sent by several political personages, including President Tsai Ing-wen (蔡英文), this tiny bookstore is drawing attention, as it first did in its former location. Founder Lam Wing-kee (林榮基) stands behind the counter taking money for books, sometimes signing them and taking selfies with customers upon request.

"Welcome back next time," he calls out to each client as they leave the store. The size of the collection might not impress, but this shop caters to a specific readership, which lends it a distinct character.

"The collection in this store is more focused, more about politics, culture, literature, and so on — definitely easier for people who are interested in these genres to come by and check out their curation," said Luke, a finance worker in his 30s.

He bought "A Tale of Two Cities" and the biography of Japanese director Toru Muranishi.

Even though Taiwan and Hong Kong are separated by distance, Luke believes their peoples' hunger for freedom and democracy is the same. He denounced Tuesday's attack against Lam as the CCP's way of trying to intimidate its dissidents.

"It is stupid and cowardly of them to assault a senior who just wants to open a bookstore," he said. Indeed, the incident has raised concerns about the safety of pro-democracy protesters from Hong Kong who are seeking asylum or considering making the move to Taiwan as China's grip around the special administrative region continues to tighten.

"The only reason it wouldn't be safe here is China is messing with Taiwan," said a Canadian teacher visiting the shop. He believes the Taiwanese government should handle this kind of incident in a high-profile manner. That way, Hong Kong activists would feel safe enough to seek refuge and share their experience here because the government is protecting them, he said.

Justine, a Hong Kong native in her 20s who currently works in Taipei, told Taiwan News that since Taiwan is an "independent country with rule of law and sovereignty," she and most of her fellow Hongkongers feel safe on the island. She pointed out that the number of those leaving Hong Kong for Taiwan to live, work, or study is on the increase, which she attributes to Taiwan's commitment to values like democracy and human rights.

However, due to China's "intense infiltration" of the country, they should take extra care when engaging in politically sensitive activities, she added.

The bookstore already appears to be a rallying point for Hongkongers on the island.

Recalling the sudden disappearance of clerks and shareholders of the original Causeway Bay Books in late 2015, Justine said, "When [the Hongkonger community] found out [Lam] was going to reopen the bookstore in Taiwan, our first reaction was that we must go and support him."