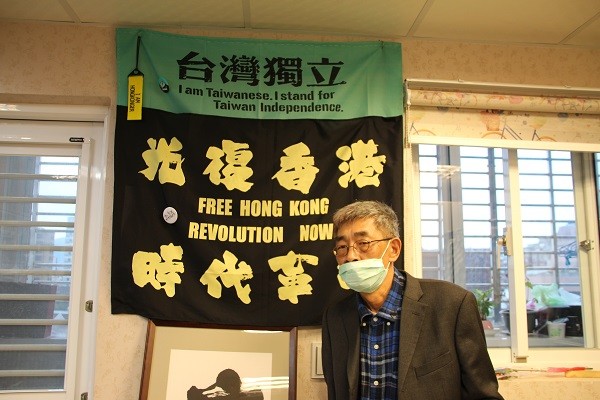 TAIPEI (Taiwan News) — Lam Wing-kee (林榮基), the former owner of Causeway Bay Books (銅鑼灣書店) who was abducted by Chinese agents in Hong Kong for selling books banned in China, on Saturday (April 25) revived his beloved bookstore in his new home of Taipei.

Taiwan Causeway Bay Books (台灣銅鑼灣書店), located on the 10th floor of a building on Nanjing West Road in Zhongshan District, is small, spartan, and well-lit. Despite its size, though, the shelves boast a wide range of subjects — from film to foreign policy, Kierkegaard to Kurosawa. There is even a children's section.

The space is essentially the same as the original, Lam said. Like its predecessor, this shop has no shortage of books delving into subject matter considered taboo in the Middle Kingdom: the Hong Kong protests, the Dalai Lama, repression in East Turkistan (Xinjiang), and the gears and levers within the Chinese Communist Party's (CCP) opaque political machine.

"If someone wants to truly understand the CCP, they cannot just look for the books that explain what the CCP is," Lam told Taiwan News on the eve of the grand opening. "The most important thing behind this party is a certain culture — without it, there would be no CCP."

He stressed the necessity of understanding the cultural context that underpins the authoritarian regime: "If you look at it the wrong way, you will not be able to see the real problem. This idea is very important to me."

Lam is all too familiar with that culture. He was one of five men associated with Causeway Bay books who disappeared in 2015, only to later reappear in Chinese custody facing trumped-up charges. Lam broke bail last year and fled to Taiwan. But while Lam is safely away from the Chinese government, its arm is long, and he has already been targeted by CCP sympathizers in attempts to intimidate him. His iron-gray hair still has a pinkish tinge from Tuesday (April 20), when one of the three men reportedly tailing him doused him with paint as he sipped coffee in a cafe.

Then, day after the three suspects were arrested, a Facebook user with apparent ties to pro-China groups, including the gangster-founded Chinese Unification Promotion Party (CUPP), posted a death threat. Lam said that prior to this incident, "I hadn't received any threats. All safe and sound."

Undeterred, Lam nevertheless sports a cap these days, according to one of his friends. Before the interview, two plainclothes police officers stopped by to check up on the store.

"What is happening now relates to the bookstore itself. China destroyed this bookstore in Hong Kong, and then I rebuilt it in Taiwan, which means we are a resistance," he said. "They want to use this behavior to hurt me; they don't want me to reopen this bookstore."

Nevertheless, the bookstore has opened its doors — and to much acclaim.