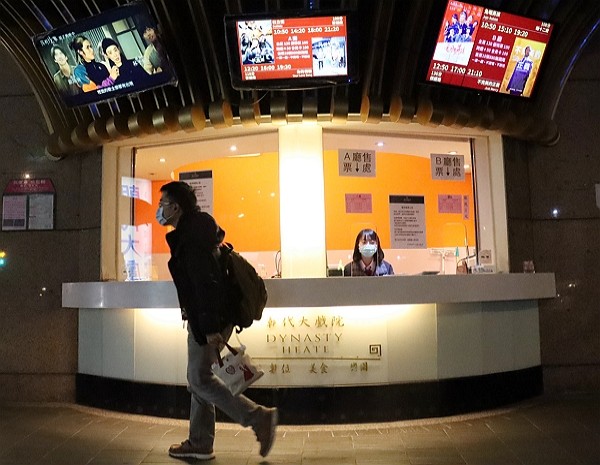 TAIPEI (Taiwan News) — As the ongoing coronavirus pandemic has left movie cinemas around the world with empty seats, the Dynasty Theater (朝代大戲院) on Thursday (April 23) announced that it will be suspending its operation for three months, becoming the first movie theater in Taiwan to do so.

Despite regulations issued by the Central Epidemic Command Center (CECC) that ban movie theaters from letting in more than 100 spectators per showing, major cinema chains across the island nation have complained about the dramatic decrease in audience numbers and urged the government to halt their operations. According to Yahoo News, since cinemas are considered places of public entertainment and have contracts with the Taiwanese government, most of them are unable to close at will.

In a Facebook post Thursday, the Dynasty Theater said that it will close temporarily for repairs and out of concern for the safety of its customers, starting May 4. The management team expressed gratitude for the public's long-time support and said that the venue will return with better seating and more advanced equipment. It also thanked the country's frontline medical workers for their hard work and all the sacrifices made during this difficult time.

The manager of the Dynasty Theater, Hsu Ching-hsing (許進興), pointed out that the theater has seen an 80 percent drop in audience numbers since the outbreak and that it is currently receiving less than 100 customers per day. He said since the theater has not renovated for a while, now seems like a good time.

Hsu stressed that all audience members are welcome to refund their pre-ordered tickets at the theater, and he promised to provide upgraded service to them once the theater finishes remodeling. He added that the management team has consulted all employees and will help them apply for government subsidies during the furlough, reported Liberty Times.

Located near the MRT Minquan West Road station, the Dynasty Theater has been showing contemporary as well as classical movies to citizens of Greater Taipei since 1991. In 1997, due to high competition from major cinema chains in the country, Hsu decided to re-position the theater as a second-run movie house and offer discounted tickets to students and local residents.