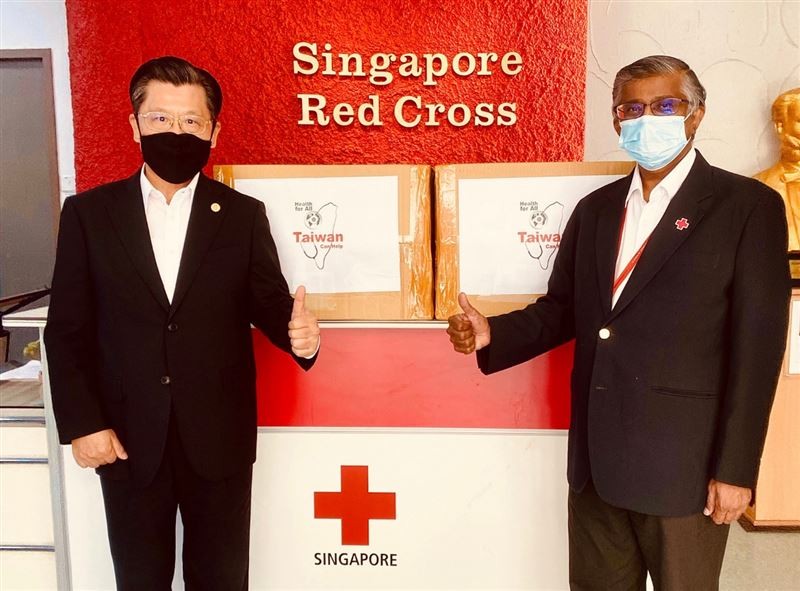 TAIPEI (Taiwan News) — A ceremony was held at the Singapore Red Cross on Wednesday (April 22) to announce the arrival of 100,000 medical masks donated by Taiwan.

During the donation ceremony, held at 3 p.m. on Wednesday, the Taipei Representative Office in Singapore (TRO) presented 100,000 surgical face masks to Benjamin William, secretary-general of the Singapore Red Cross. During the ceremony, William expressed his special thanks to Taiwan for its aid during the epidemic.

William said that the masks are particularly precious during this difficult time. He said that the masks will be used by Red Cross frontline service personnel, volunteers, the elderly, migrant workers, and underprivileged groups, reported SETN News.

William added that the two sides should further discuss the feasibility of cooperation during the outbreak. Taiwan's representative to Singapore Francis Liang (梁國新) said in a speech that the masks are part of the Ministry of Foreign Affairs' (MOFA) initiative to donate 10 million masks to countries most severely impacted by the Wuhan coronavirus (COVID-19) pandemic.

Liang said the traunch of masks symbolizes the solid friendship between Taiwan and Singapore as well as the importance of global solidarity in the fight against COVID-19. Liang emphasized that epidemic prevention has no borders and that only through joint efforts can everyone defeat the virus together, according to the report.

In addition to thanking the Red Cross for its cooperation, Liang said the donation represented the goodwill of the government and people of Taiwan. He added that Taiwanese are grateful for Singapore's assistance after the 1999 Jiji earthquake and 2018 Hualien earthquake.

"Therefore, at the time of an intense epidemic, Taiwan is eager to continue to work together with its Singaporean friends and support each other," said Liang. He added that the relationship between the two nations has a long history and that "The exchanges between the two governments and people are quite close."

When news first broke of the donation, Singapore's first lady Ho Ching (何晶) reacted with a cryptic "Errrr" on her Facebook page. After facing a fierce backlash, she amended her post by thanking "all the friends in Taiwan" and said that "mistakes" had been forgiven, without explaining what they were.

Some speculate that the "mistake" Ho had mentioned was fake news circulating in Singapore that Taiwan had blocked exports of face masks made by Singaporean mask manufacturer ST Engineering in Taiwan. However, Taiwan's Finance Minister Su Jain-rong (蘇建榮) on April 13 explained that although a ban on the export of masks had been enacted on Jan. 24, the Singaporean company had been given permission to export the masks it has already produced to Singapore, clearing customs on Jan. 29, and that the equipment owned by the company had been sent back to Singapore on Feb. 12, reported Initium Media.