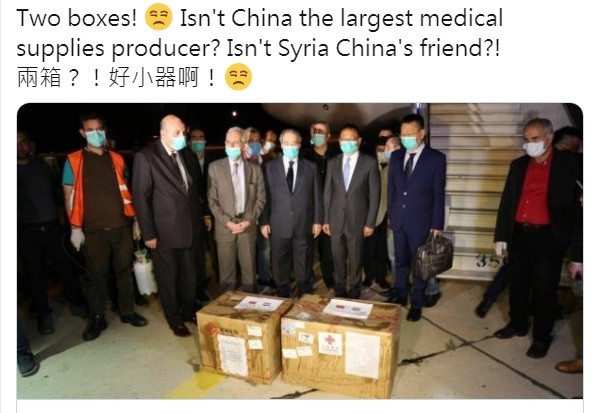 TAIPEI (Taiwan News) — Communist China's effort to paint itself as the savior of the world during the Wuhan coronavirus (COVID-19) pandemic suffered another blow last week when it only managed to muster two small boxes of test kits for its war-torn ally Syria.

On Wednesday (April 15), China trumpeted the donation of two, yes two, boxes of coronavirus test kits to Syria. In a photo meant to showcase China's extraordinary "generosity" during the pandemic, over a dozen Chinese and Syrian officials can be seen standing around two tiny, tattered boxes.

The comical scene sees the Chinese and Syrian dignitaries donning face masks, standing awkwardly and looking down at the two battered boxes. Although China's ambassador to Syria claimed the tiny shipment was the first batch of many medical supplies, Syrians were less than impressed with the communist country's meager gesture, reported The New Arab.

Syria analyst Danny Makki sarcastically wrote on Twitter that China had delivered medical supplies to Syria "and yes those two boxes were the supplies. Mask diplomacy doesn't (properly) apply to Syria." He added the jet then continued onto Beirut and Lebanon where it delivered a small batch of 3,000 test kits and 200 thermometers.

He observed the flight to be "more a PR operation than a significant delivery of humanitarian assistance." Incredibly, the dignitaries, including Deputy Foreign Minister Fayssal Mikdadd and Assistant Health Minister Ahmad Khlaifawi, went through the trouble of posing for photos with China's ambassador during a signing ceremony for the aid shipment, according to the report.

Although Syria's official number of infections stands at 42 cases and three deaths, experts believe the numbers are far higher, given the corrupt nature of the regime, collapsed health care system, influx of refugees returning home, and large number of pilgrimage sites.

Unfortunately for Syria, its communist ally has quickly earned a reputation for hawking substandard test kits, face masks, and other personal protective equipment (PPE) to countries hard hit by the pandemic. Taiwan, on the other hand, has won much praise for the millions of donations of masks it has made to European countries, U.S. states, New Southbound Policy nations, and diplomatic allies, and is even planning on exporting mask-making machines in August.

China delivered medical supplies to Syria in the fight against #COVID19, and yes those two boxes were the supplies. Mask diplomacy doesnt (properly) apply to Syria. pic.twitter.com/fz4s4W6tQm