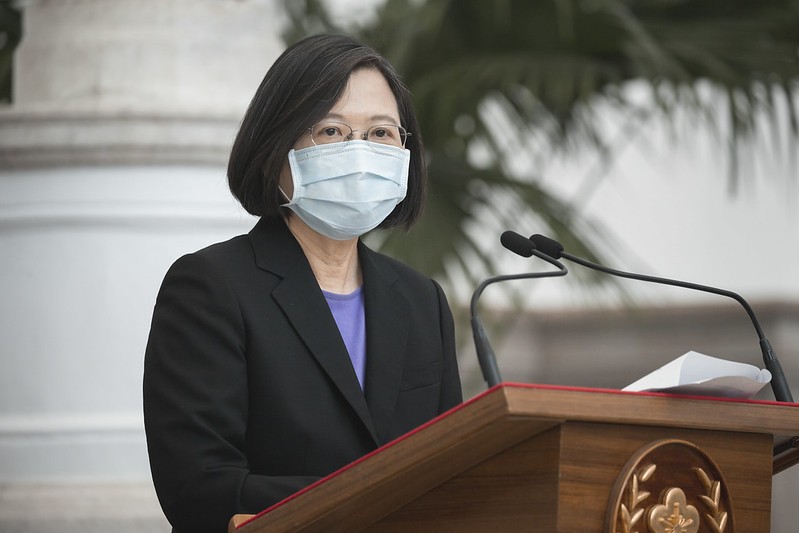 TAIPEI (Taiwan News) — President Tsai Ing-wen (蔡英文) has issued an apology for the spread of coronavirus (COVID-19) on a Goodwill Fleet ship, which docked at Zuoying (左營) harbor in Southern Taiwan after returning from a visit to Palau in early April, causing public concern of a potential outbreak in the local community.

“I am the chief of staff. This is my responsibility,” said Tsai at a press conference on Wednesday morning (April 22). “I would like to offer my apology to the people for the grave negligence caused by the Navy during the recent mission, thus leading to the risk of a virus outbreak to the people,” she said.

The Central Epidemic Command Center (CECC) by Wednesday afternoon has confirmed 28 coronavirus cases who previously served on the Panshi Fast Combat Support Ship as part of the Goodwill Fleet’s visit to Palau and Pacific training exercises from March 12 to April 9. The CECC has identified nearly 700 civilians who have come into contact with the members of the fleet, with more than 400 people now placed under home quarantine.

Five out of more than 700 military personnel on board three military ships had reported experiencing a fever—a common symptom of the coronavirus—during their mission, said the Ministry of National Defense (MND) on Monday (April 21) via a press release following an initial investigation. However, all of them were discharged in mid-April after a brief six-day quarantine on the ships.

It was not until last Saturday (April 18) when three sailors were confirmed to have been infected by the virus after going to the hospital on their own were all fleet members recalled for collective quarantine.

Chief of the General Staff Huang Shu-kuang (黃曙光) and Navy Commander Liu Chih-pin (劉志斌) are now self-monitoring their health after having brief contact with the fleet members. Lawmakers and the media are now questioning whether the MND has been engaged in any cover-up of the virus cluster and if it could have been prevented or mitigated.

Critics and opposition parties have also cast doubt on the necessity of the Goodwill Fleet’s mission during a global pandemic, which has infected more than 2.5 million of the world’s population and killing more than 177,000 people as of Wednesday. Tsai said during the conference that ensuring the nation’s security is as important as controlling the spread of the virus, especially when facing China’s continual military intimidation in the Taiwan Strait and across the region.

In addition to visiting the Pacific ally, Tsai acknowledged that the fleet had also conducted “special tasks,” even though she declined to discuss the matter further. She also denied that the Navy had traveled to other places other than Palau despite the fleet returning to Kaohsiung nearly one month after it left the Pacific island state on March 15.

Speaking at an impromptu press conference on Tuesday evening (April 21), Defense Minister Yen Teh-fa (嚴德發) confirmed that two of the Goodwill Fleet’s military ships were deployed on April 12 and 13 to monitor the activities of the People’s Liberation Army Navy’s (PLAN) Liaoning aircraft carrier, which was reported by Japanese defense authorities as having led a fleet to sail from the Miyako Strait on April 11 to the West Pacific. However, Yen declined to discuss further if there were other confidential tasks entailed in the Goodwill Fleet’s mission.

Tsai stressed she has asked the MND to complete the investigation into the Navy’s negligence as soon as possible and that she would never show partiality for those found responsible. She also urged the public to offer support and encouragement to the military which has ensured the country’s safety and made contributions to the government’s disease prevention work.