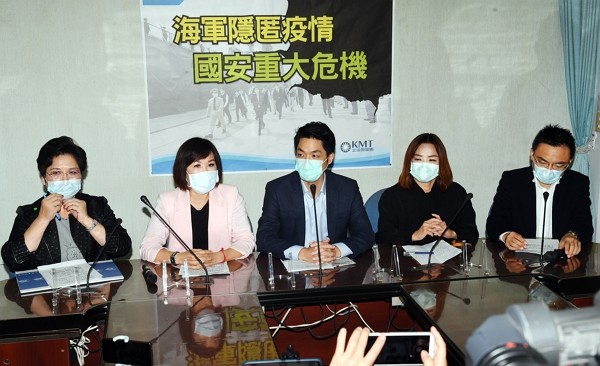 TAIPEI (Taiwan News) — Members of the main opposition Kuomintang (KMT) party on Monday (April 20) demanded Taiwan's Navy address public speculation about its mishandling of the coronavirus outbreak aboard its vessels and launch an investigation into all responsible parties.

During a KMT press conference Monday (April 20) at the Legislative Yuan , legislator Wayne Chiang (蔣萬安) emphasized that the infection of Taiwan's service members should be treated as a national security crisis and that the Navy needs to reveal more details of its goodwill mission to Taiwan's pacific ally, Palau. His comments were backed by legislators Lu Yu-ling (呂玉玲), Ma Wen-chun (馬文君), Wen Yu-hsia (溫玉霞), and Hung Meng-kai (洪孟楷), who also attended the press conference.

Chiang stressed that the KMT had originally asked Navy Deputy Commander Mei Chia-shu (梅家樹) to answer questions related to the three naval supply vessels, but the invitation was turned down by the Ministry of National Defense (MND). He said the Navy should explain who gave permission for the sailors' disembarkation and whether they had consulted the Central Epidemic Command Center (CECC) before carrying out the diplomatic mission.

Chiang pointed out that a total of 24 Navy members have been confirmed with the coronavirus, the largest transmission cluster the country has faced since the outbreak. He urged the Navy commanders to come forward and take responsibility for the new cases, adding that any officials proven to have caused the new infections should be penalized, reported CNA.

Lu also called into question whether the 720 crew members who have spent time on the three ships arrived at their quarantine locations via specialized taxis instead of public transportation. She also requested an explanation from the Navy as to why the three-ship flotilla was allowed to travel overseas during the ongoing pandemic, reported UDN.