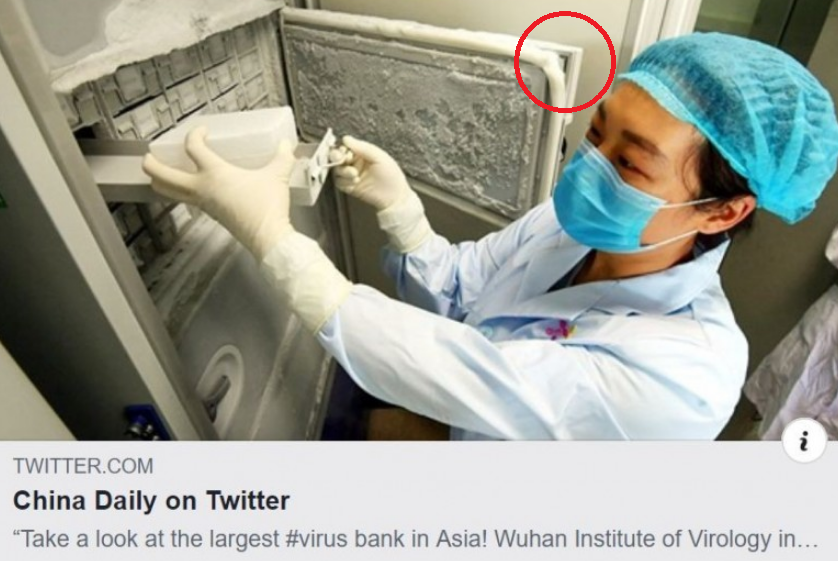 TAIPEI (Taiwan News) — Photos have resurfaced from 2018 showing a warped seal on a freezer door as suspicions grow that the Wuhan coronavirus (COVID-19) pandemic could have started at a poorly managed virology lab in Wuhan.

The official Chinese government explanation of the coronavirus pandemic is that it began in the city of Wuhan at a wet market known as the Huanan Seafood Wholesale Market. However, another theory to emerge recently is that the virus first made the jump to humans in one of two labs in Wuhan, where bat viruses were being studied.

Photos posted by the China Daily in early March, before later being scrubbed, show a seal around a freezer door looking dangerously warped. The original tweet proudly proclaimed the photos as being of the Wuhan Institute of Virology, where it said 1,500 viruses are kept.

On March 10, Twitter user John Pollizzi reposted one of the photos showing a badly bent seal and quipped: "I have seen better seals on my refrigerator in my kitchen." The image went viral, as many other netizens were equally horrified by the apparently lax safety measures, and was published on British media on Sunday (April 19). Earlier in April, a report by South China University of Technology researcher Xiao Botao that was posted in February but scrubbed from the internet by Chinese censors has been revisited by vlogger Laowhy86.

The paper was originally posted on ResearchGate.net with the title "The Possible Origins of 2019-nCoV coronavirus" and co-authored by Lei Xiao from Tian You Hospital, which is affiliated with the Wuhan University of Science and Technolgy. It proposes that the virus leaked from one of two laboratories in Wuhan.

The authors wrote that samples of coronavirus from bats in Yunnan and Zhejiang provinces, thousands of miles from the wet market, had been taken for study at the Wuhan Institute of Virology. According to testimony from dozens of residents, there were no bats sold at the market.

The study identified the Wuhan Center for Disease Control & Prevention (WHCDC), which is only 280 meters from the wet market, as having collected 155 horseshoe bats, the type suspected of carrying CoV ZC45 from Hubei province and 450 from Zhejiang province. The report cited an expert who had been involved in collecting the samples as having been attacked by bats and having blood spattered on his skin on previous occasions at the lab.

Surgeries were also performed on the bats to collect tissue samples, according to the report, with the medical waste from some procedures being highly infectious. Given that the wet market was only 280 meters away and the Union Hospital was next door, if a leak had occurred at the WHCDC, it could have quickly spread to the wet market, hospital, and nearby community.

Meanwhile, Shi Zhengli, a scientist known as "Bat Woman" who works at a Biosafety level 4 (BSL lab) in the Wuhan Institute of Virology, had also collected samples from horseshoe bats from as far away as Yunan as part of a study funded by a US$3.7 million grant by the U.S. government. In 2018, she wrote that humans could catch the virus directly from bats, according to Beijing News.

In January of 2019, she and her team sequenced the new form of pneumonia spreading in Wuhan, and on Jan. 23 published a report in which they claimed it was 96 percent the same as the virus she had collected in Yunan. Xiao's report also identified this Wuhan Institute of Virology, which is 12 miles away, as another potential site from which the virus may have leaked.

Shi has repeatedly denied allegations that the virus leaked from her lab, claiming that she had tested all of their samples without finding an exact match for the strain of the virus that has infected humans. She has yet to release any records, samples, or data to the international scientific community.

However, leaked US diplomatic cables reveal that Shi had expressed concerns about "safety and management weaknesses" in the lab, reported The Washington Post. Shi denies theories that the virus had leaked out and told Caixin that the "coronavirus is nature punishing the human race for keeping uncivilized living habits," adding, "I swear on my life that it has nothing to do with our laboratory."

MADE IN CHINA⁉️I have seen better seals on my refrigerator in my kitchen ❗️IF ANYONE BOTHERED TO NOTICE THE SEAL IS BROKEN ON THE DOOR SHE HAS OPEN RITE IN THIS VERY PICTURE, AS EXAMPLE‼️ pic.twitter.com/LaVwVB3QvS