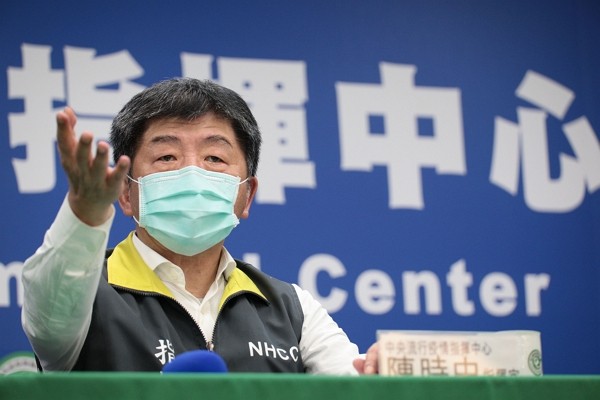 TAIPEI (Taiwan News) — In response to public speculation that the Navy had been careless in its handling of the coronavirus pandemic, Health Minister and Central Epidemic Command Center (CECC) head Chen Shih-chung (陳時中) on Sunday (April 19) urged Taiwanese to stop casting blame on one another.

During the CECC's daily press conference on Sunday, Chen announced that the island nation had confirmed 22 more cases of COVID-19, 21 of whom had been on Navy vessels. This brought the number of Navy servicemen who had contracted the virus on a goodwill mission to the Pacific state of Palau to 24, while 720 are currently in quarantine.

Although the Ministry of National Defense (MND) claimed on Saturday (April 18) that all crew members had kept their masks on during their visit to Palau, a photo posted by Taiwan's representative office there shows otherwise. Many Taiwanese also pointed out that some of the coronavirus-infected sailors had already displayed symptoms while on board but were still given permission to disembark and return home.

When asked about whether the Navy had been a loophole in Taiwan's coronavirus prevention efforts, Chen said that "witch-hunting" behaviors are detrimental to society, which is built on mutual trust. He stressed that people should be empathetic to COVID-19 patients and respect individuals who are willing to come forward with their symptoms.

Chen said a "witch-hunt" phenomenon will force potential carriers of the disease to lie about their health and divide communities. He added that the public should also cease directing harsh criticism towards medical professionals who had misdiagnosed their patients' symptoms, reported Taro News.

The health minister said he has faith in the wisdom and kindness of Taiwanese and hopes everyone can remain united during the pandemic. He also encouraged any individuals who are feeling unwell to seek medical attention immediately instead of putting it off, reported CNA.