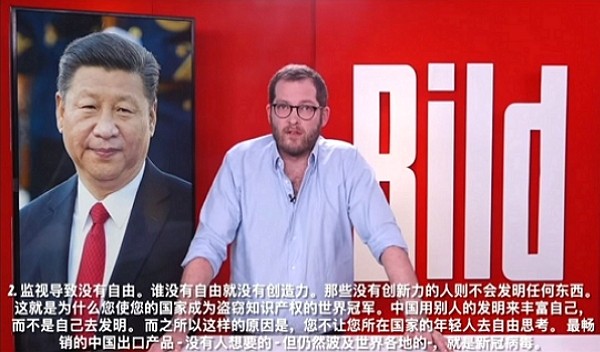 In an article titled "They endanger the whole world," Bild Editor-in-chief Julian Reichelt responds to Xi's accusing the paper of "fueling nationalism" with its publication of an opinion piece suggesting that the Chinese government may be responsible for the economic fallout of the coronavirus pandemic. He said that Xi also referred to the report as "infamous."

Reichelt pointed out that the Chinese Communist Party (CCP) is controlling its people through monitoring systems and that Xi would not have become the country's leader without surveillance. He criticized Xi for endangering the Chinese population as well as individuals worldwide by refusing to monitor high-risk wet markets where the coronavirus is widely believed to have originated.

Reichelt proceeded to label the CCP as the "champion in intellectual property theft" and said that it has made a tremendous fortune with inventions from other countries. He also mocked the CCP for "exporting" something that no countries had asked for — the coronavirus.

The veteran news editor said the Chinese government had received reports of the human-to-human transmission of COVID-19 soon after the outbreak started in the Chinese city of Wuhan but chose to "leave the world in the dark" for fear that the pandemic would become a national disgrace for China. He concluded that Chinese citizens have been showing dissatisfaction with Xi's leadership and that the deadly coronavirus "plague" will be regarded as Xi's political legacy.

In addition to the article, Bild also created a video with simplified Chinese subtitles for readers from the East Asian nation. In the three-minute video, Reichelt enumerated his discontents with Xi and the CCP, predicting that the political party would fail in its attempts to “strengthen China through an epidemic that came from China.”