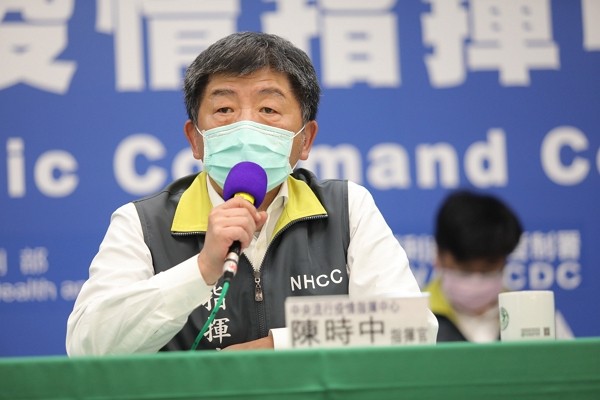 During his daily press conference Sunday afternoon, Health Minister and CECC head Chen Shih-chung (陳時中) announced that 21 individuals on Taiwan's navy vessels, along with one citizen returning from the U.S., were confirmed to have COVID-19. Out of the 22 new patients, 20 were men and two were women.

Following Saturday's (April 18) news that three Taiwanese navy trainees had contracted the coronavirus, more than 700 crew and trainees on three different vessels have been placed under quarantine and tested. Chen said the results revealed that the 21 new patients were all on board the same ship, while individuals from the other two vessels have all tested negative for the disease.

To better differentiate cases related to the navy vessels from coronavirus-infected individuals returning from overseas, Chen said the new cases on board the ships will now be referred to as the "navy vessel cases" instead of imported. He also clarified that the CECC is still uncertain whether the crew members were infected while in Palau, contrary to what the media have depicted.

Chen expressed his gratitude to the medical workers who stayed up all night to perform virus tests for the navy ship crew. He also urged the Ministry of National Defense (MND) to comply with any new regulations issued by the CECC to minimize the chance of community clusters on the island.

The other imported case (No. 400) is a male student who traveled to the U.S. for school in 2019. He started to experience symptoms on April 10 and reported his conditions to the airport staff upon his arrival in Taiwan on April 17. He was confirmed with the coronavirus on Sunday.

As of Sunday afternoon, Taiwan has reported a total of 420 COVID-19 cases, 365 of which were imported, while 55 were local. Six have died from the disease, and 189 have been released from hospital isolation.