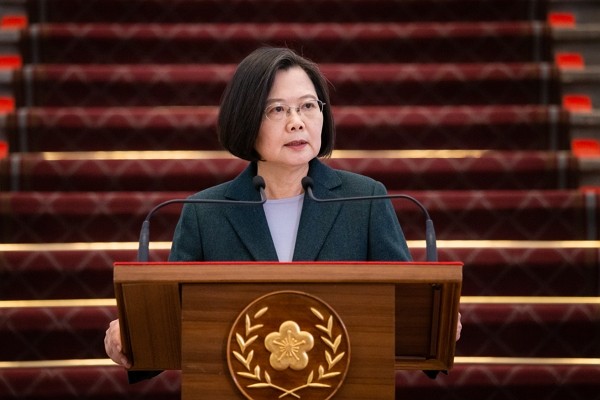 President Tsai Ing-wen (蔡英文) saw the number of her Twitter account followers surge past 1 million earlier this week as the social media platform has become a tool to strengthen Taiwan's participation in the global community, she said Friday (April 17).

"Taiwan wants to engage with the world. And social media gives us a free, open platform to enter the global conversation. Pandemics have no borders. But fortunately for us, social media transcends distance as well," Tsai said in a pre-recorded video released on Twitter on Friday.

She said her Twitter milestone came "at a unique and unprecedented time in history. Social media...helps Taiwan connect with the world."

"Coming together and sharing our stories reminds us that we are not alone. We will get through this. And we will do it together" said Tsai, in the video that also showcased Taiwan's efforts to fight the COVID-19 pandemic and expressed the desire of the country and its citizens to help in the international community.

Since January this year, Tsai has been tweeting regularly about Taiwan's efforts to combat COVID-19, including the country's donation of millions of surgical face masks to health care workers in countries around the world.

The posts have received widespread attention and boosted her Twitter following by 40,000 in the last week alone.

The push for higher Twitter follower numbers intensified in early March, when Democratic Progressive Party (DPP) Deputy Secretary- General Sidney Lin (林鶴明) called for more Taiwanese to follow Tsai on Twitter and "tell our side of the story" to the world, instead of allowing the story to be told by China.

Twitter also appears to be a place for Tsai to engage with other world leaders. On April 7, she sent out a tweet to wish the U.K. Prime Minister Boris Johnson a swift recovery.

In another post that day, Tsai offered to donate surgical masks and medical supplies to Japan. In response, Japanese Prime Minister Abe Shinzo retweeted Tsai's post and thanked Taiwan for its warm support.

As of Saturday, Taiwan had reported 398 confirmed COVID-19 cases, including six deaths, with 178 cases released from quarantine, while the total cases around the world had risen to more than 2.2 million, with over 150,000 deaths, according to statistics from Taiwan's Centers for Disease Control.

Tsai wasn't always an active Twitter user. Her Twitter account was idle for many years before she reactivated it on Jan. 15, 2017, nine months after she took office, due to intensifying Chinese efforts to isolate Taiwan internationally.

Even though a growing number of politicians in Taiwan are using Twitter to send their messages to an international audience, Twitter is still a minor third-place player in Taiwan in social media, according to the 2019 Taiwan Internet Report published by the 8 Taiwan Network Information Center on Tuesday.

The report said 79.2 percent of those surveyed between September and November last year used online social media, among whom 98.9 percent used Facebook, 38.8 percent used Instagram and only 5.6 percent used Twitter.

According to the website of social media marketing company Socialbakers, Tsai's 1 million followers makes her the most-followed Twitter user in Taiwan, with Apple Daily in second with nearly 980,000.

In comparison, the website showed the most-followed local Facebook page EBC News at 4.8 million. Four of the 10 most-followed pages on Facebook are those of news outlets, while three are those of singers -- Mayday lead singer Ashin (阿信), Jay Chou (周杰倫) and Wang Leehom (王力宏).

In our battle against #COVID19, social media reminds us that we’re #StrongerTogether. As my Twitter reaches 1 million followers, I want to thank you for supporting #Taiwan. I’ll keep sharing stories about how #TaiwanCanHelp, & I hope you’ll keep sharing your stories with me: pic.twitter.com/zaaiwdpchK