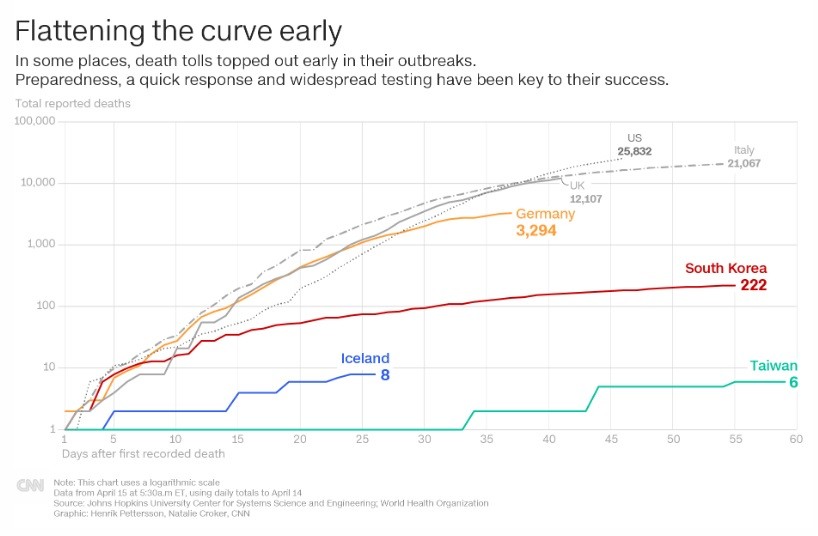 TAIPEI (Taiwan News) — Out of apparent fear of offending China, CNN has listed Taiwan among four "places," not countries, that have set a model example of how to flatten the Wuhan coronavirus (COVID-19) epidemic curve.

In a report titled "As governments fumbled their coronavirus response, these four got it right. Here's how." CNN, out of apparent deference to China, lists Taiwan, Iceland, South Korea, and Germany as four "places" that have been better able to contain the COVID-19 outbreak over an extended period of time. The article then lists 12 important lessons learned from these four "places," with the four gleaned from Taiwan being "be prepared, test, trace, and quarantine, use data and tech, and be aggressive."

As an American vlogger noted, given its close proximity to China, CNN cited a Johns Hopkins University model which rated Taiwan as the second-highest country at risk of experiencing a major breakout when the epidemic first began. Fast forward four months, and Taiwan has only 395 total confirmed infections, six deaths, and zero new cases reported for two days in a row.

Under its first lesson, "Be prepared," CNN pointed out that Taiwan had learned a bitter lesson from the SARS outbreak in 2003, which resulted in 181 deaths in the country. One of the key lessons of this experience led to the establishment of the Central Epidemic Command Center (CECC), which was put into action on Jan. 20, one day before the country's first confirmed case.

Health Minister and expert epidemiologist Chen Shih-chung (陳時中) was put in command and given the authority to make most major decisions about the containment of the epidemic, avoiding political entanglements. The report then cited a list of 120 action items initiated by the CECC over the next three weeks that "could serve as a manual" on how to deal with an outbreak.

For the second lesson, "Be quick," the news site wrote that on Dec. 31, Taiwan was already screening arriving passengers for pneumonia symptoms, despite the fact that China and the World Health Organization (WHO) would continue to deny human-to-human transmission for three more weeks. The country issued a travel alert for Wuhan on Jan. 20 and within just two days, the CECC began providing daily afternoon briefings.

The next week, Taiwan began monitoring the movements phones used by persons under quarantine. The country quickly started issuing travel and entry restrictions for people coming from and going to Wuhan and other hotspots in China.

Because of these swift actions, Taiwan was able to avoid having to resort to lockdown or even social distancing measures until April 1, when there were only 329 cases. In contrast, the UK had 335 deaths and 3,000 cases on March 20, when Prime Minister Boris Johnson finally ordered the closure of pubs, restaurants, and schools.

Under the third lesson listed for Taiwan, "Test, trace and quarantine," the report noted that CECC authorities aggressively test all suspected cases, patients diagnosed with flu and pneumonia, and persons in quarantine twice before they can be released. They also carry out extensive contact tracing, hunting down all persons who come in contact with a confirmed case and closely monitoring them.

As for the fourth and final lesson learned from Taiwan, "Use data and tech," Jason Wang, associate professor of pediatrics at Stanford Medicine, told CNN that in the case of Taiwan, "A coordinated government response with full collaboration of its citizenry [was] combined with the use of big data and technology." Wang, who coauthored a Journal of the American Medical Association (JAMA) report on Taiwan's handling of the outbreak, said that the country was able to deftly merge the data for the National Health Insurance Administration (NHIA) and National Immigration Agency (NIA) to quickly pinpoint at-risk persons.

It also is important to note that Taiwan stands out from these four countries due to a much lower number of confirmed cases and deaths. Germany has 138,217 cases and 4,098 deaths, South Korea has 10,635 cases and 230 deaths, and Iceland has 1,739 cases and eight deaths, while Taiwan only has 395 cases and six deaths.

Also, Taiwan has the lowest number of confirmed coronavirus cases per million people over 50 days, with 16.58 people per million, while Iceland has a staggeringly high rate of 5,060.80, according to a report by Our World in Data. Meanwhile, South Korea has a rate of 207.00 per million, and Germany has a rate of 1,556.98.