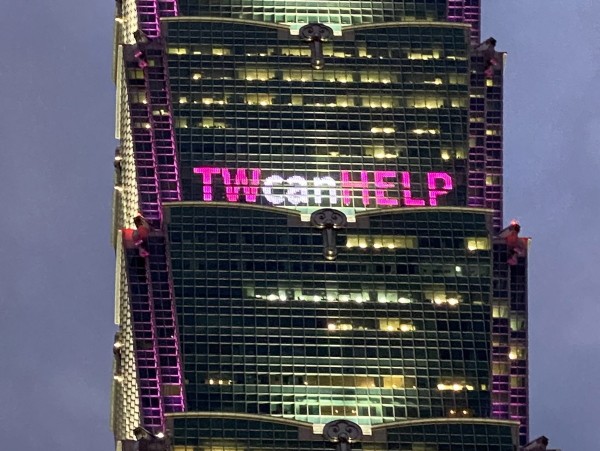 TAIPEI (Taiwan News) — In order to thank Taiwan's health care workers for helping bring the country's reported cases of Wuhan coronavirus down to zero and boost the morale of the nation's people, Taipei 101 flashed words of encouragement such as "TWcanHELP" in pink.

On Tuesday (April 14), Taiwan reported zero new coronavirus cases for the first time in 36 days and repeated the feat on Thursday (April 16). Also on Tuesday, a full-page advertisement appeared in The New York Times as part of a crowdfunding campaign to raise global awareness of Taiwan's ability to provide medical assistance during the coronavirus pandemic, and it included the hashtag #TaiwanCanHelp.

From 6:30 p.m. to 10:00 p.m. on Wednesday and Thursday, Taipei 101 was illuminated with pink lights that flashed words of encouragement between the 59th and 60th floors. Examples included "TWcanHelp," "Epidemic prevention does not discriminate between you and me," (防疫不分你我) "compatriots unite" (國人齊心), "Go Taiwan!" (台灣加油).

On its Facebook page, Taipei 101 announced that the signs were posted to recognize Taiwan's progress in battling the disease domestically and its efforts to aid other countries in need across the globe. This marks the third time since the outbreak began that Taipei 101 has posted signs to boost public morale.

In early February, Taipei 101 displayed messages thanking frontline staff for fighting the disease. In March, it again lit up with messages expressing gratitude to medical staff working to protect the nation from the coronavirus.