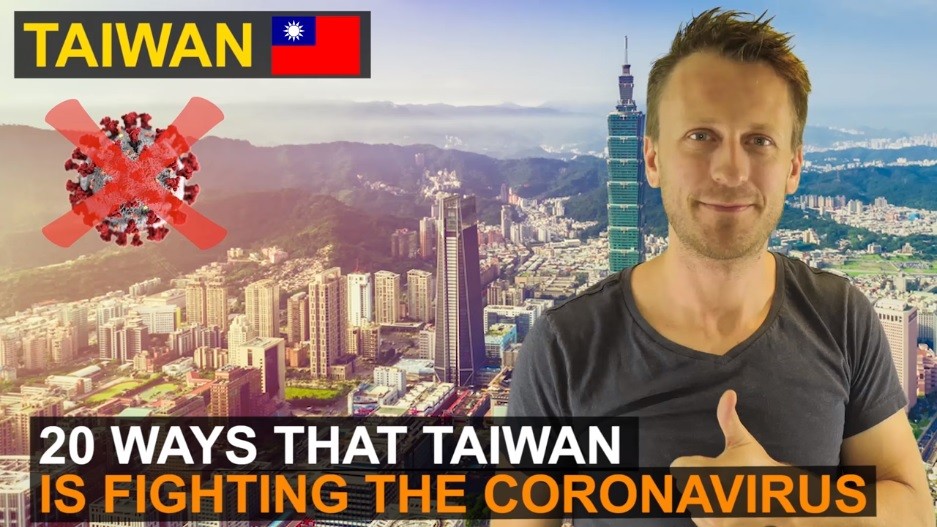 TAIPEI (Taiwan News) — As Taiwan sees its second day with zero new cases of Wuhan coronavirus (COVID-19) in a week, an American blogger has created a video expounding on how the plucky island country has been able to fend off the contagion, despite its proximity to communist China, the origin of the outbreak.

The video's creator, Dustin Pfundheller, 33, who is currently living in Florida where he works as a dentist, told Taiwan News that he created the video because he was so impressed that Taiwan, a country that is at an extremely high risk of a COVID-19 outbreak, had so few cases. He said that he first became acquainted with Taiwan when he studied at Shih Hsin University in the fall of 2007 and wanted both foreigners and Taiwanese to know what Taiwan had done to protect their citizens from the deadly disease.

The video, which was uploaded to Facebook on April 9, starts by explaining that before the outbreak started, four percent of Taiwanese worked in China, while 2,000 Chinese tourists on average visited the country per day. Pfundheller then pointed out that the epidemic first started during the Lunar New Year, the busiest time of the year for travel in both Taiwan and China, similar to Thanksgiving in the U.S.

He noted that despite the fact that Taiwan had initially been ranked as the second-highest country at risk of experiencing a major breakout of the virus by a Johns Hopkins University model, it actually now has the lowest case rate per million over the past 50 days in the world. To counter claims that only authoritarian regimes have been effective at containing the virus, Pfundheller stated the fact that Taiwan is a democracy.

Pfundheller then listed 20 actions Taiwan took to keep itself safe from the coronavirus:

Taiwan began screening passengers from Wuhan on Dec. 31 for signs of the virus, when there were only 27 people in Wuhan diagnosed with the disease.

17. Temperature monitors in the airport

Due to Taiwan's experience with the SARS outbreak in 2003, it already had a number of thermal scanners deployed in its airports to spot patients with fevers.

Anyone who arrives from an infected area must undergo a 14-day quarantine. He mentioned that those ordered to undergo home quarantine have an app installed on their smartphone, and if authorities discover that a person has violated their quarantine, they will face stiff fines.

15. Fines for not reporting

There are also huge fines for those who refuse to report viral symptoms.

Persons undergoing quarantine are tested twice before they are officially allowed to venture out again.

After panic buying set in for surgical masks, Taiwan implemented a real-name ration system and dramatically ramped up mask production. It has been so successful that it is now donating millions of masks to countries in need around the world.

Taiwan mobilized its military in February to help boost mask production in factories.

11. Educating everybody about hand-washing

Taiwan's Centers for Disease Control (CDC) launched public information campaigns about the importance and most effective methods of hand-washing.

10. Educating people that not everybody shows symptoms

9. Letting people know it's not about your race or ethnicity

Taiwanese leaders have preached tolerance — despite claims of "racist attacks" by WHO Director-General Tedros Adhanom — and there have been no documented cases of racial discrimination when it comes to the treatment of patients in Taiwan.

Every office, school, and community center regularly checks the temperatures of people before they enter.

Along with the ramped up production of masks, production of 75 percent alcohol and hand sanitizers increased even faster to meet demand.

6. Having health insurance that covers 99% of the citizens

The National Health Insurance (NHI) is available to everyone in Taiwan, including foreigners who have lived in Taiwan for six months or more. He added that if the cardholder must go into a quarantine center, NHI will cover the cost of food, shelter, and lodging.

Pfundheller observed that Taiwan has a culture of wearing masks, which has been proven to reduce the spread of coronavirus.

Arrivals from overseas must provide a travel history of the previous 14 days.

To prevent panic buying and hoarding of masks, Taiwan early on implemented a ration system of two masks per week, which later became three per week, and currently stands at nine every two weeks.

Pfundheller said that ultimately it was "just a collaboration of the government, the people, and private businesses all working together to make sure the country is safe."

After itemizing the top 20 list, Pfundheller emphasized his wish that "more of the world could use Taiwan as an example." He made the point that Taiwan has already laid out a blueprint for disease containment to follow.

He praised Taiwan for going from being listed as the second-highest at-risk countries in the world to having the lowest case rate per million. Pfundheller then closed by saying "Let's all be a little bit more like Taiwan."