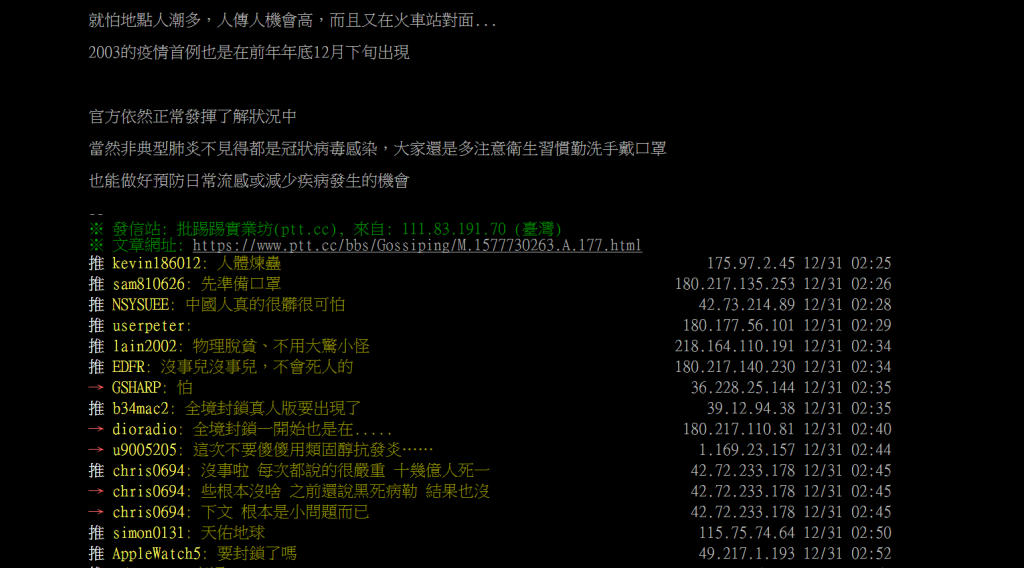 TAIPEI (Taiwan News) — As world leaders are pointing a finger at what U.S. President called a "China-centric" World Health Organization for failing to respond to the human-to-human coronavirus transmission, a Taiwanese health official was thanked for his vigilance — and his warning four months ago — to prepare the whole country for the deadly outbreak.

On Wednesday (April 15), Lo Yi-chun (羅一鈞), deputy director-general of the Centers for Disease Control (CDC), was said to have spotted a post on Taiwan's Reddit-like platform, PTT, on the early morning of Dec. 31. The post shares a number of screengrabs taken from different Chinese online forums. The screengrabs include an announcement from Wuhan's health department dated Dec. 30, 2019, which notes that a number of patients with pneumonia of unknown etiology were recorded and demands medical institutions in the city report to the department if there is a case with similar symptoms. The post also shared a screengrab of a group chat between the deceased Chinese whistleblower doctor Li Wenliang and other medics about some patients exhibiting signs of a new SARS-like illness in early December, three months before the conversation was revealed to the world in mid-March — sadly, after Li's passing. Li was detained by the Chinese police in the name of "spreading false rumors" and "disrupting social orders" in January, and was later infected with the virus.

A photocopy of an RNA test report was also placed in the PTT post, which comes from a Wuhan medical center. The test report shows a patient tested positive for a type of SARS coronavirus. Another screengrab presents a group chat between doctors at the Wuhan Union Hospital, in which a medic confirmed a case of coronavirus infection and its isolation for treatment. The doctor, surnamed Liu, reminded his friends in the group to stay alert. At the end of the PTT post, the writer, who is said to have been a Taiwanese physician until recently, reminded Taiwanese netizens to pay attention to personal hygiene to avoid catching the virus.

According to Taiwan's Central Epidemic Command Center (CECC), CDC official Lo Yi-chun found the post on Dec. 31 and quickly reported it to the top of his organization. The health official also wrote an email the same day to the World Health Organization (WHO), stating his worries and requesting its attention as well as any available information about the coronavirus. The email, according to CDC chief Chen Shih-chung (陳時中), should have been taken seriously, given the WHO staff's medical backgrounds. Apparently, however, it was not.

“News resources today indicate that at least seven atypical pneumonia cases were reported in Wuhan, CHINA. Their health authorities replied to the media that the cases were believed not SARS; however, the samples are still under examination, and cases have been isolated for treatment.

“I would greatly appreciate it if you have relevant information to share with us. Thank you very much in advance for your attention to this matter."

In addition to the email to the WHO on Dec. 31, Taiwan's health authorities immediately decided to require an on-board inspection of flights from Wuhan.