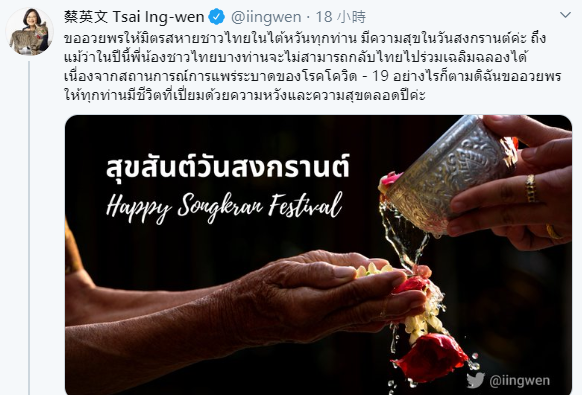 Her @iingwen account was the most-followed Taiwanese user on the social network, CNA quoted Democratic Progressive Party (DPP) Deputy Secretary General Sidney Lin (林鶴明) as saying. He said the feat revealed the growing role of “digital diplomacy” as people in many parts of the world were unable to move around during the pandemic.

On other social networks, Tsai registered about 2.8 million followers on Facebook, an increase of about 200,000 since she won re-election on Jan. 11. The president also broke through the 650,000-mark on Instagram.

Tsai’s Twitter account reportedly received a clear boost from a recent flame war between Chinese and Thai users centering on a Thai actor and his girlfriend’s online references to Hong Kong and Taiwan.

Lin said that not only had the president stepped up her use of Twitter during the coronavirus pandemic, but she had also continued a habit of tweeting good wishes to followers on the occasion of several foreign festivals and holidays. On Tuesday (April 14), she had also turned her attention to the Thai New Year, known as Songkran.

“Best wishes to all of our Thai friends for a Happy #Songkran. Although some of you can’t make it home because of the #COVID19 outbreak, I hope everyone will stay safe & greet the New Year with new hope & much happiness!” Tsai tweeted.

The Taiwanese president’s international profile also received a boost from praise for her government’s handling of the coronavirus pandemic, with the island nation only recording 395 cases so far, including six deaths, far fewer than most other nations.