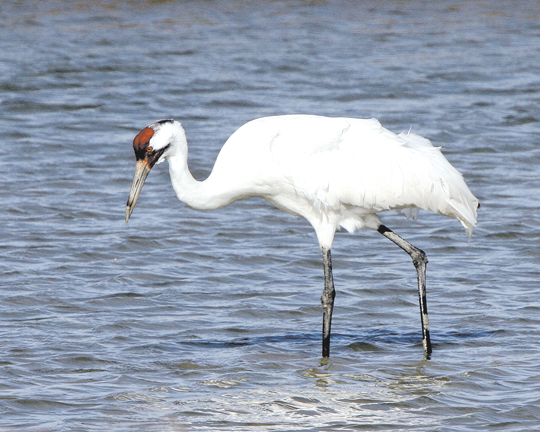 Whooping cranes were one of the first species to appear to rebound from extinction over the past century thanks to a concentrated effort of legislation and public awareness.
Once down to about 15, the world's only wild flock of the statuesque whooping crane has continued its comeback, now numbering a record 237 birds in its Texas Coastal Bend wintering ground.
U.S. Fish and Wildlife biologist Tom Stehn, who tracks the whooping crane flock, said 45 cranes were born this year, including seven sets of surviving twins, which is unusual for the species.
Stehn rides in a single-engine plane at low altitude over the 56-kilometer stretch of Texas coastline where the birds feast on blue crab and wolfberries. The birds tend to stay in family groups in territories about 2 kilometers wide.
Stehn plots the small groups on photocopied maps of the areas. Last year he counted 220, and this year, 237.
Whooping cranes were one of the first species to appear to rebound from extinction over the past century thanks to a concentrated effort of legislation and public awareness. While far from reaching the kind of numbers enjoyed by the gray whale and American peregrine falcon on the U.S. Fish and Wildlife's list of recovered species, their numbers have slowly increased since counting started in 1938.
The Texas coast has had a good decade for species recovery, most notably perhaps with the whooping crane and the Kemp's ridley sea turtle on Padre Island.
The Kemp's ridley nests only within about a 322-kilometer section of northern Mexico's Gulf of Mexico coastline and due to harvesting was by 1978 on the brink of extinction.
Through a binational recovery project, turtles were brought to nest on South Texas' beaches. The female turtles always return to nest on the beach where they were born, and the number of nests on this newly programd nesting ground has steadily increased.
But several inland species don't seem as lucky. Attempts to restore habitat for ocelots and jaguarundi in deep South Texas so for haven't yielded notable population increases. And the 4,200-hectare Attwater Prairie Chicken National Wildlife Refuge west of Houston hasn't been able to bring back the bird biologists know for its spectacular mating dance.
"It's kind of a counter story to the whooping crane - a native Texas species that isn't doing so hot," Fish and Wildlife Service spokeswoman Elizabeth Slown said.
Taking too long to learn
It took most of the 20th century to educate people about the whooping crane.
"People in the 1920s were really realizing how rare they really are," Stehn said, attributing the decline to habitat loss and hunting. "A lot of the early whooping crane actions were to get the word out to sportsmen to make sure hunting was no longer a factor in losses. Probably by the 1950s that message was finally getting out."
Government action also helped. A 1916 treaty between the United States and Canada which was later expanded to include Mexico, Russia, and Japan, made it illegal to shoot birds outside of an established hunting season. Land for the Aransas National Wildlife Refuge near Corpus Christi, which covers a large part of the whoopers' wintering grounds, was acquired in the 1930s to protect water fowl. The whooping crane was one of the first species listed under the Endangered Species Act of 1973.
Stehn credited this year's record number of young to mild weather at their nesting grounds in Wood Buffalo National Park in northern Canada's boreal forest.
"They avoided having that cold weather hit, that just-above-freezing and drizzle that seems to kill the chicks," he said.
Whooping crane tours have become a cottage industry for Coastal Bend towns such as Rockport, Fulton, and Port Aransas. Boats depart daily between mid-December and April for those who want to go out on the water to catch a glimpse of the cranes, which stand about 1.5 meters tall and are North America's tallest bird.
The Rockport-Fulton Area Chamber of Commerce has links to several tour operators on its Web site http://www.rockport-fulton.org/. Boat tours run several hours and range in price from around US$30 per person to US$180 for a chartered boat for one to six people.
The Chamber's Leora Pimentel said visitors' chances of seeing the cranes are "very likely."
"They don't hide," she said if the cranes. "And people will also see sand hills (cranes) and other wildlife."
Development has hindered the rebuilding of the prairie chicken population.
The park is a small piece of what was once an expansive grassy plain but is now taken up by roads and buildings. Biologists in Attwater are attempting to breed the Attwater's prairie-chicken in captivity and then monitor them in the park. Slown said there are only about 200 of the once-abundant species left.
"It would be nice to have more people know about this bird and care about it," she said. "I do think that's part of the reason for the success of the whooping crane. You can't love something unless you know about it."
If you go
ROCKPORT BIRDING AND KAYAK ADVENTURES:
http://www.rockportadventures.com. Located in Fulton Harbor. Tours on MV Skimmer, a 12.6-meter boat, start at US$35; kayaking starts at US$50.
FISHERMAN'S WHARF: http://www.texaswhoopers.com. Departing from Rockport Harbor Wednesday-Sunday, 10 a.m.-2 p.m., and Port Aransas, Tuesdays, 10 a.m.-3:30 p.m. Tours on MV Wharf Cat, a 22.5-meter catamaran with observation deck, are US$30 for adults, US$20 for children 12 and under.
CHARTERS:
http://www.texasbirdingcentral.com or 361-790-3746. Departs from the Sea Gun Marina 16 km north of Rockport. Half-day charters, US$300 for up to six people; full day, US$400. Specializes in photography tours.
GETTING THERE:
Out-of-state visitors can fly into the Corpus Christi International Airport, which is served by Continental, American, Delta, and Southwest airlines and a number of car rental outlets. From the airport, it's about an hour's drive to Fulton, Rockport, or Port Aransas.