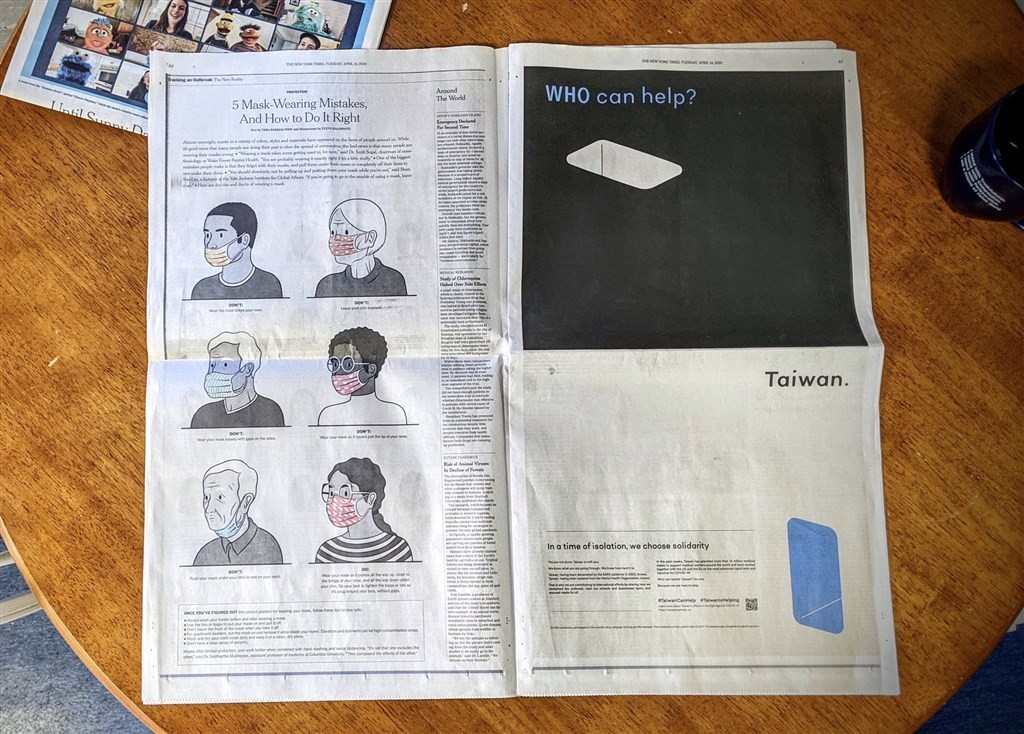 TAIPEI (Taiwan News) — A full-page advertisement appeared in The New York Times on Tuesday (April 14) as part of a crowdfunding campaign to raise global awareness of Taiwan's willingness and ability to provide medical assistance and expertise during the Wuhan coronavirus (COVID-19) pandemic.

The ad was the brainchild of Taiwanese Youtuber Ray Du (阿滴) and graphic designer Aaron Nieh (聶永真), who began a crowdfunding project to highlight Taiwan's contributions to the fight against COVID-19 and counter the baseless accusations of "racism" leveled against the country by World Health Organization (WHO) Director-General Tedros Adhanom on April 9. The two quickly coordinated with like-minded individuals on April 10, beginning a crowdfunding campaign on zeczec.com to issue a constructive response to Adhanom's allegations.

Within 15 hours, the team garnered approximately NT$30 million (US$1,000,000) in donations from 26,980 sponsors, and the project's website was visited two million times. The final version of the advertisement was published following a vote among followers and advice from professional diplomats. On his Facebook page, Nieh said Tuesday that half of the funds raised by the campaign were spent on the advertisement. As for the remaining NT$15 million, he wrote that 45.82 percent will be used on digital advertising for the "Taiwan Can Help" campaign, 31.97 percent to purchase medical supplies for use in Taiwan, and 22.20 percent to buy medical equipment to donate to foreign nations.

The New York Times ad starts with the simple question "WHO can help?" Nieh wrote that the capitalized "WHO" is a direct reference to the UN organization.

Below "WHO" is a rectangular, white hole, which Nieh says is a metaphor for the gap in epidemic containment caused by the WHO's slow response and political interference, followed by the response: "Taiwan."

Under "Taiwan" is a vertical rectangular portal, which Nieh says is a path, an exit, and a methodology to offer the greatest possible assistance to the outside world.

Next appear the words "In a time of isolation, we choose solidarity." The ad then states that the people of Taiwan experienced similar hardships during the SARS epidemic in 2003 and a sense of isolation being excluded from the WHO since 2017 due to pressure from China. The ad points out that Taiwan has managed to contain the outbreak enough to keep schools and businesses open and provide adequate medical masks for all. It states that an important part of the nation's efforts to aid the outside world in combating the epidemic is to share these experiences.

The authors of the ad then mention the fact that Taiwan has donated 16 million face masks to countries around the globe. They added that Taiwan has also been collaborating with the U.S. and EU on developing rapid test kits and vaccines for the deadly disease.

The advertisement closes by asserting that no one can isolate Taiwan "Because we are here to help." It then includes the hashtags #TaiwanCanHelp and #TaiwanIsHelping, which have both been trending on Twitter since the ad was posted.