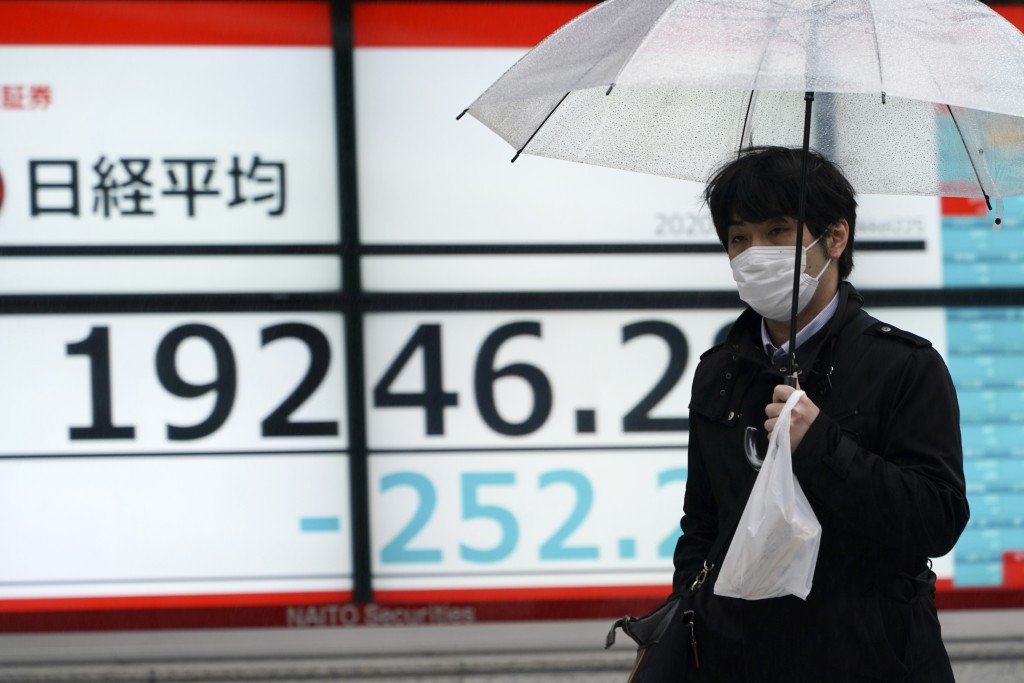 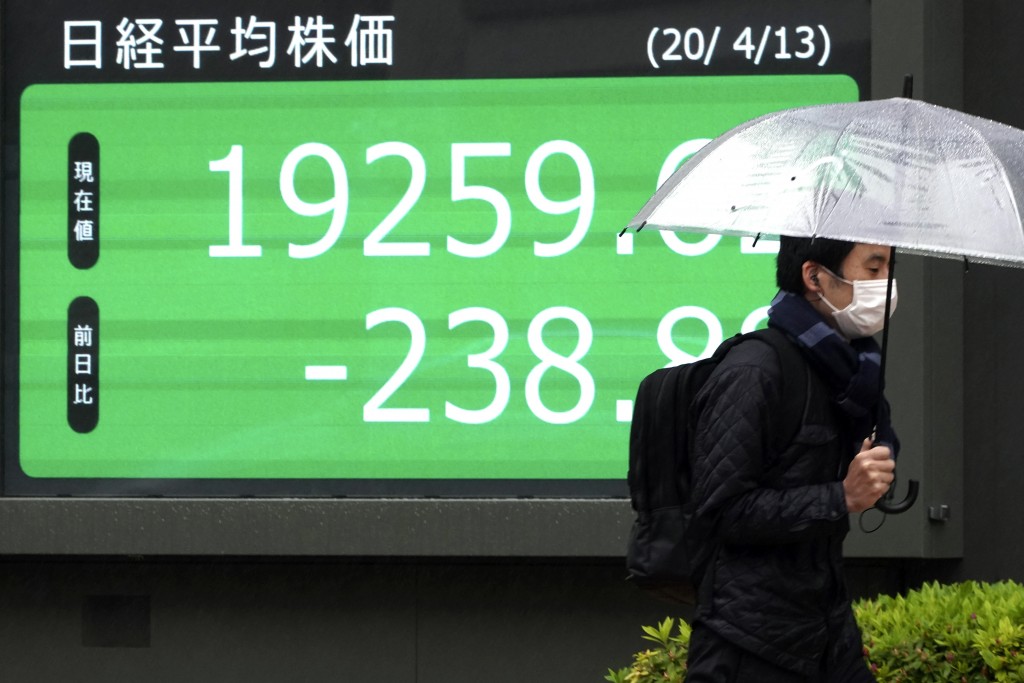 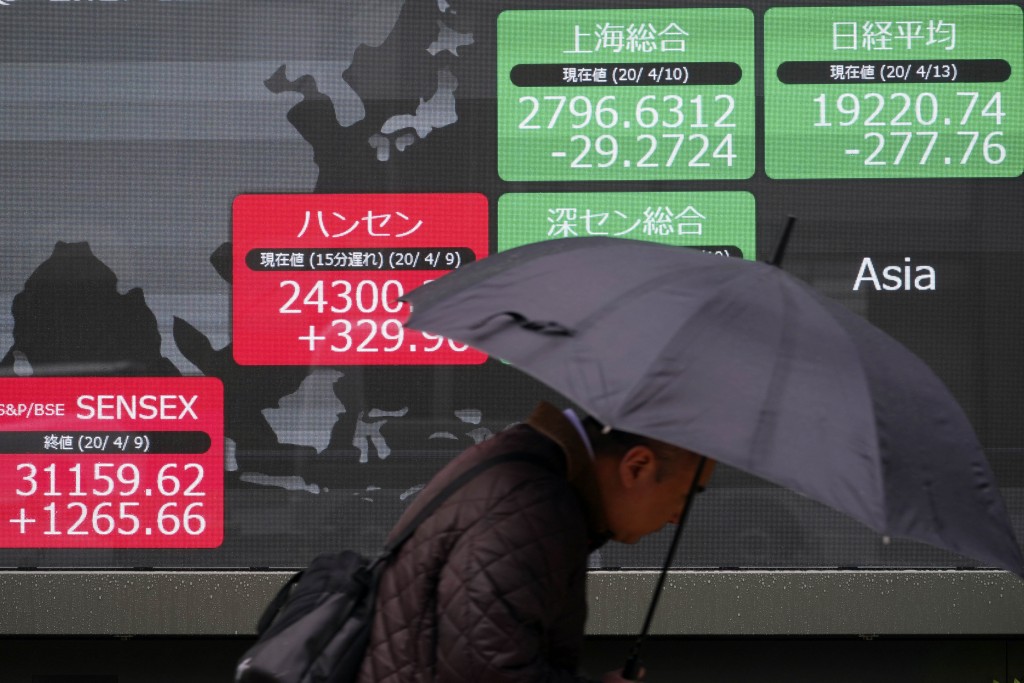 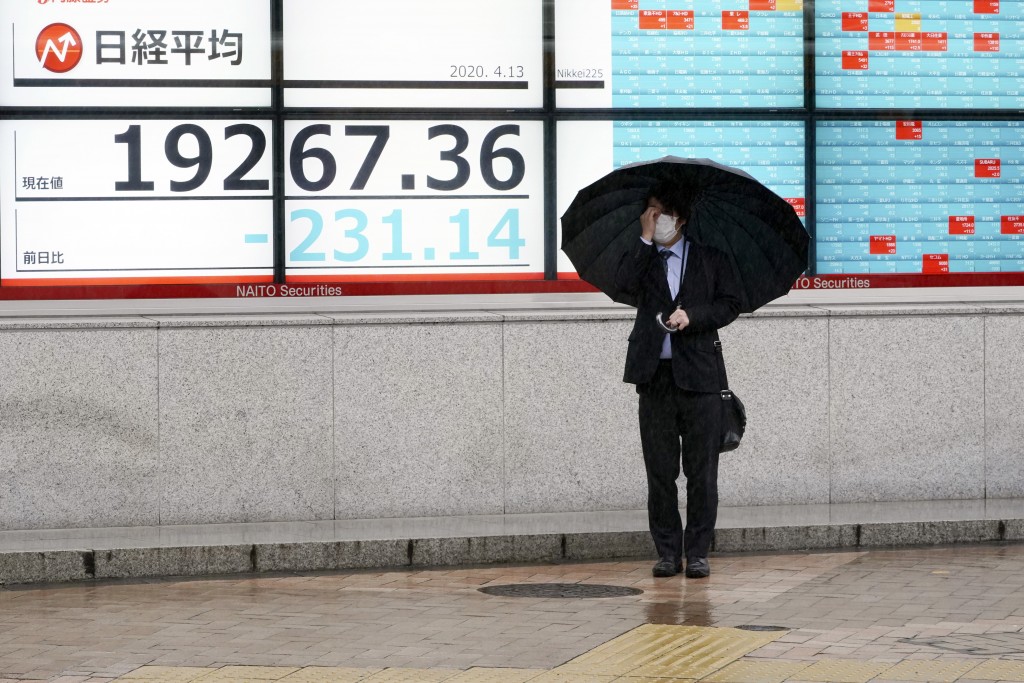 TOKYO (AP) — Asian shares rose Tuesday although investors were braced for sobering news about how the coronavirus pandemic has hurt global corporate earnings and the Chinese economy, the driver of growth for the region.

Data released Tuesday by China showed that its trade improved in March but was below last year’s levels, and forecasters warned Chinese exporters face another slump as the coronavirus pandemic depresses global demand.

Exports to the United States fell 20.8% from last year to $25.2 billion while imports of American goods declined 12.6% to $9.9 billion. China’s politically sensitive trade surplus with the United States was $15.3 billion, accounting for three-quarters of its global surplus of $19.9 billion.

On Wall Street, the S&P 500 fell 1% after cutting early losses by more than half toward the end of the day. The benchmark index surged 12% last week, its best gain since 1974.

Cautious optimism that the outbreak has begun to plateau in some of the worst-hit areas and another big infusion of economic support by the Federal Reserve helped spur last week’s big rally. This week, stocks could be in for more volatility as companies report results for the first quarter, though analysts will be focused primarily on what management teams have to say about what the rest of the year looks like.

Details may be hard to come by, as many companies have ceased giving earnings forecasts because of the uncertainty over when government officials will determine it's safe to roll back the social distancing and stay-at-home mandates that have all but ground the economy to a halt.

“The companies don’t know what demand is going to be over the next three months or over the next six months,” said Willie Delwiche, investment strategist at Baird.

Several major banks, including JPMorgan Chase, Wells Fargo and Bank of America, and big companies, including UnitedHealth Group, Johnson & Johnson and Rite Aid, are on deck to report results this week.

Analysts predict that earnings for all the companies in the S&P 500 will be down 9% in the first quarter from a year earlier, according to FactSet. That would be the biggest annual decline in earnings for the index since the third quarter of 2009 when earnings slumped nearly 16%.

“Our view is its one big write-off year,” said Keith Lerner, chief market strategist at SunTrust Advisory Services. “The market is going to start thinking more about 2021, 2022. On the other side of this, what does that business look like?”

The closure of businesses and mandates for people to stay home to combat the coronavirus pandemic have forced a record number of Americans out of work and raised the possibility that many businesses could end up bankrupt. That has many investors anticipating what may be the worst recession since the Great Depression.

There are more than 1.92 million confirmed cases worldwide, led by the United States with more than 582,000, according to a tally by Johns Hopkins University.

Traders are trying to gauge when shutdowns in many countries might ease. China has begun, cautiously, to reopen activity in regions such as Wuhan and surrounding Hubei province that were shut down during the worst of its outbreak.

Oil prices got a brief boost following the decision by OPEC and other oil producers over the weekend to cut production by nearly 10 million barrels a day, or a tenth of global supply, beginning May 1.

Analysts said the cuts were not enough to make up for the void in demand due to business and travel shutdowns due to the coronavirus. But the deal at least helped resolve a price war that took U.S. crude to near $20 per barrel, pummeling U.S. oil and gas producers.

ENERGY: U.S. benchmark crude rose 14 cents to $22.55 a barrel in electronic trading on the New York Mercantile Exchange. On Monday, it initially jumped more than $1 but then lost ground, falling 35 cents to $22.41 a barrel. Brent, the international standard, rose 40 cents to $32.14 a barrel.