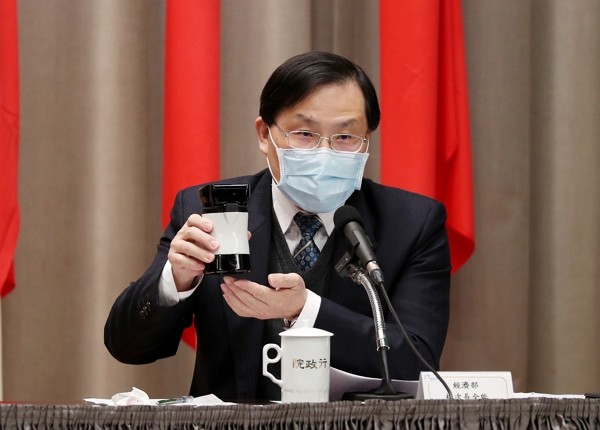 The ITRI has developed a prototype for the testing device, which can produce results in under an hour at a 90-percent accuracy rate, Vice Minister of Economic Affairs Lin Chuan-neng (林全能) said at a press conference.

The nucleic acid test is designed to screen patients who are in the incubation period, meaning those who have contracted the disease but have not yet displayed symptoms, Lin said.

Weighing about 600 grams, the device is likely the smallest rapid diagnostic test for COVID-19 that is under development, according to the official.

Clinical trials of the rapid testing device are scheduled to be completed by the end of April, with trial production to commence in June, and mass production to begin in July, Lin said.

During the trial production period, 10 rapid testing devices will be made, along with 10,000 testing reagents designed to be used with the devices, said Lo Ta-sheng (羅達生), director-general of the Department of Industrial Technology under the Ministry of Economic Affairs (MOEA).

These will be distributed to hospitals for further testing, said Lo.

That kit is designed to diagnose patients who are already showing symptoms of the disease, according to NHRI President Liang Kung-yee (梁賡義).

The NHRI kit, which produces results in 15-20 minutes, is still under development and could start mass production once a manufacturer obtains permission from the Food and Drug Administration (FDA), Liang said at Monday's press conference, estimating a three-month time frame.

According to Liang, the Executive Yuan has budgeted NT$2.16 billion (US$71.2 million) to boost Taiwan's testing and treatment capabilities for COVID-19.