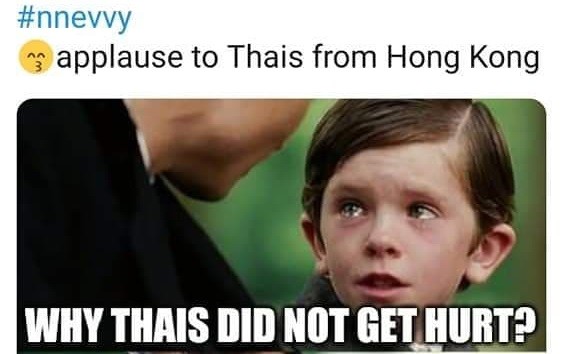 TAIPEI (Taiwan News) — After Thai netizens found themselves embroiled in a massive flamewar with Chinese on Twitter, they used self-deprecating humor to counter insults hurled by their online adversaries.

Over the weekend, Chinese netizens discovered to their dismay that Thai actor Vachirawit Chivaaree, also known as "Bright," who is the star of the hit TV soap opera "2gether," is not actually gay like the character he portrays but has a girlfriend. His love interest was revealed to be actress Weeraya Sukaram, who goes by the nickname "New" and the Twitter handle "nnevvy."

Bright retweeted a photographer's images and wrote "taken from 4 countries," one of which was Hong Kong. When Chinese netizens saw the retweet, they became enraged and called Bright out for labeling the special administrative region as a country. Bright then apologized to Chinese followers for improperly labeling Hong Kong as a country. However, Thai netizens came to his defense, as they felt he had done nothing wrong.

Next, a Chinese netizen dug up a photo New had taken in Taiwan with Bright, commenting that she is a "cute Chinese girl." New replied "What?" in Thai, which in this context was a way to coyly express embarrassment. Unfortunately for New, Chinese readers interpreted it as meaning that she was disappointed for being compared to a Chinese woman. A friend of New's then asked what style of dress she was wearing, and she responded "Taiwanese style."

Chinese netizens then combined New's perceived disappointment with being referred to as Chinese and her description of the outfit as "Taiwanese" as an affront to China and proceeded to accuse her of supporting Taiwanese separatists. Chinese netizens then found that New had previously retweeted a post stating that the Wuhan coronavirus (COVID-19) had originated in China, which contradicts what Chinese have been told by their propaganda outlets: that the disease started in the U.S. Fury reached a fever pitch, and they began hurling insults at Thailand, with the hashtag #nnevvy soon becoming a battlefield on Twitter.

Instead of directly counter-attacking with insults of their own, Thais posted countless memes showing people being completely unphased by the best that Chinese trolls could throw at them. For example, a meme taken from the film "Finding Neverland" shows the character Peter, played by Freddie Highmore, crying and asking why Thais are not hurt by Chinese insults, to which Barrie, played by Johnny Depp, replies "cultural difference, just stay in the wall." Many of these Chinese netizens criticized the Thai government, but Thais retorted that they frequently criticize their government on their own. One said that Thailand is poor, and a Thai responded that China is "Pooh," as in Winnie the Pooh, to whom Chinese Chairman Xi Jinping (習近平) has frequently been compared..

Another tactic used was to shoot down Chinese Communist Party (CCP) talking points with censored facts and history. Soon, citizens of Taiwan, Hong Kong, the Philippines, and others joined forces with the Thais with memes of their own.