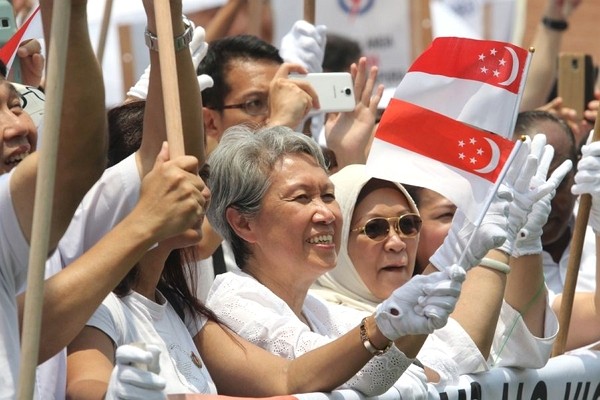 TAIPEI (Taiwan News) — After being criticized for her impolite response to Taiwan's face mask donation to Singapore, the Southeast Asian nation's first lady Ho Ching (何晶) edited her remark Monday (April 13) and said she is grateful for the offer by the island nation.

In a Facebook post published Saturday (April 11), Ho left a sarcastic "Errrr" next to a Taiwan News article titled "Taiwan to donate medical masks to Singapore." Her reaction has been interpreted by many Taiwanese and Singaporeans as ungrateful, while some others have backed Ho by explaining that the Taiwanese government failed to supply masks to Singapore when they were needed the most.

In response to speculations about Taiwan in January withholding surgical masks manufactured by Singapore Technologies Engineering (ST Engg), Finance Minister Su Jain-rong (蘇建榮) pointed out that the masks were exempt from the export ban and had been shipped back to Singapore on Jan. 29. He added that two production lines of ST Engg were also moved back to Singapore on Feb. 12, reported CNA.

Despite requests from several Taiwanese to retrieve the masks, Taiwan's Ministry of Foreign Affairs (MOFA) on Sunday (April 12) has reaffirmed its decision for the donation and said the friendship between the two countries would not be compromised by one comment.

On Monday morning, however, Ho revised her Facebook post and urged netizens to put aside the bilateral friction she created. She expressed thanks to "all the friends in Taiwan" for their help and stressed that she was incredibly grateful for the island country's kind gesture.

Ho added that "mistakes" are also forgiven, without further elaborating. She did however encourage internet users, regardless of ethnicity, to stop attacking each other via online platforms. She emphasized that the real enemy countries had to face was the coronavirus instead of one another, so it was essential for all communities to put aside their differences and join forces.