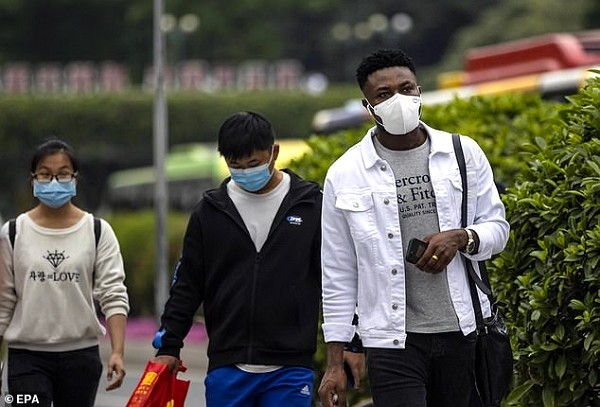 TAIPEI (Taiwan News) — Ambassadors of several African countries issued a protest letter to the Chinese Foreign Ministry Monday (April 13) over racist mistreatment of African nationals in China, particularly in the city of Guangzhou.

In the letter, the ambassadors pointed out that there has been “ongoing forceful testing, quarantine, and maltreatment of African nationals” amidst the Wuhan coronavirus (COVID-19) pandemic in China. They said many Africans have been asked to undergo investigation and 14 days of quarantine even when they had neither traveled outside their jurisdictions nor come into contact with confirmed COVID-19 patients.

The ambassadors said they worried continued discrimination would stigmatize Africans and create the impression that they were more prone to contracting the coronavirus than others. They demanded that the Chinese government address the situation and cease all inhumane treatment toward their citizens, reported Liberty Times.

Following an accusation made by World Health Organization (WHO) head Tedros Adhanom that Taiwan is waging a racist campaign against individuals of African descent, international leaders have defended the island country.

Meanwhile, a series of videos showing African migrants being evicted from their apartments in China and denied entry into local hotels has surged online. In one video, a group of African men were seen dragging their luggage and being herded in the rain by Chinese police, with one individual exclaiming that they were being chased away. In another recording, a Nigerian man was confronted by local authorities, who proceeded to confiscate his passport, reported CNA.

Although China's foreign ministry has yet to respond to the letter, the Chinese envoy to the Republic of Zimbabwe on Saturday (April 11) insisted that the incidents in Guangzhou were independent cases and should not be exaggerated. He claimed that the law in China does not discriminate against anyone.

According to the Global Times, on Sunday (April 12), Yang Rihua, deputy director-general of Guangdong Provincial Public Security Department, also declined to comment on the discriminatory incidents. He emphasized that foreign nationals would be expelled from the country if they refused to comply with the Chinese authorities.