TAIPEI (Taiwan News) — The Chinese aircraft carrier the Liaoning was spotted prowling the waters to the east of Taiwan on Saturday (April 11) as a U.S. warship cruised through the Taiwan Strait.

Taiwan's Ministry of National Defense (MND) on Sunday (April 12) announced that it had detected the Liaoning with five other ships cruising to the east of Taiwan the previous day. Japan's Self-Defense Force first spotted the six-vessel battle group sailing through the East China Sea toward Okinawa on Friday (April 10).

On Sunday, the MND announced that it had sighted the Liaoning along with two frigates, two destroyers, and a supply ship, plowing its way past Okinawa through the Miyako Strait on Saturday (April 11). The ministry said the warships then turned south and sailed through waters east of Taiwan on their way to the South China Sea to "engage in long-distance sea training," reported Storm Media.

The ministry said that the military used its surveillance and tracking system to monitor the carrier's movements. It reassured the public that the warships were on a training mission and that there was no need for the public to be concerned.

The arrival of the Chinese ships was hot on the heels of recent movements by American vessels and aircraft around Taiwan. On Saturday, the Arleigh Burke-class guided-missile destroyer the USS Barry (DDG 52) steamed through the Taiwan Strait. 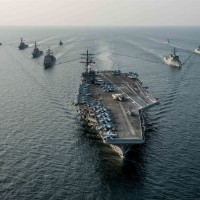 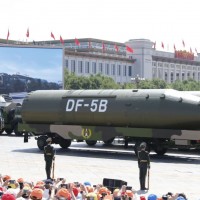 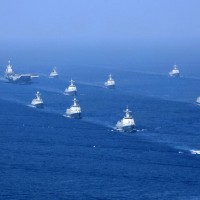