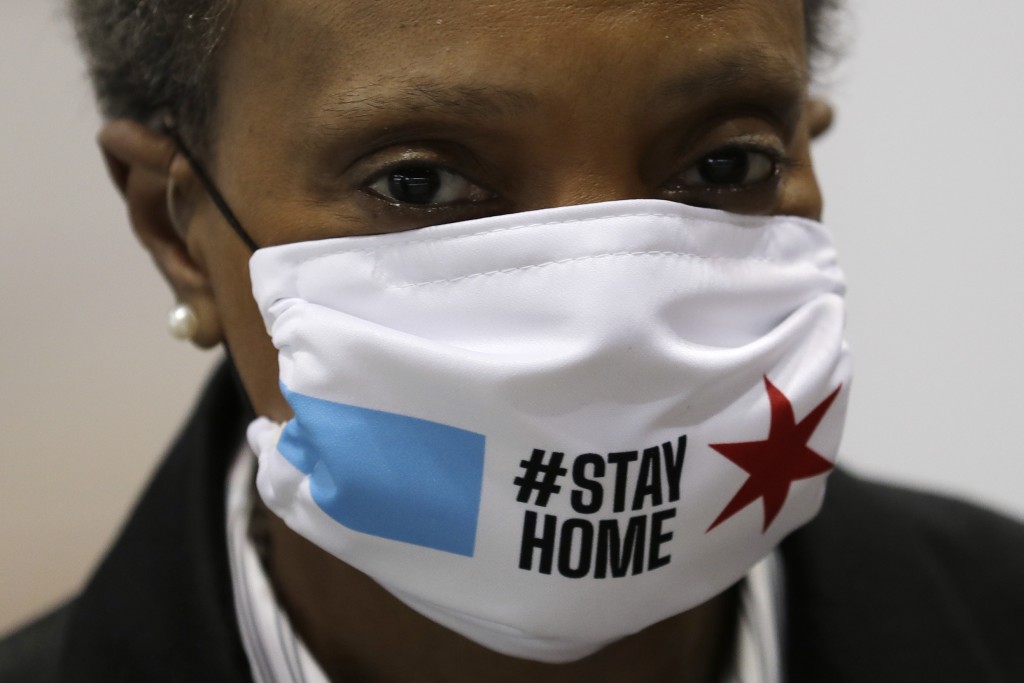 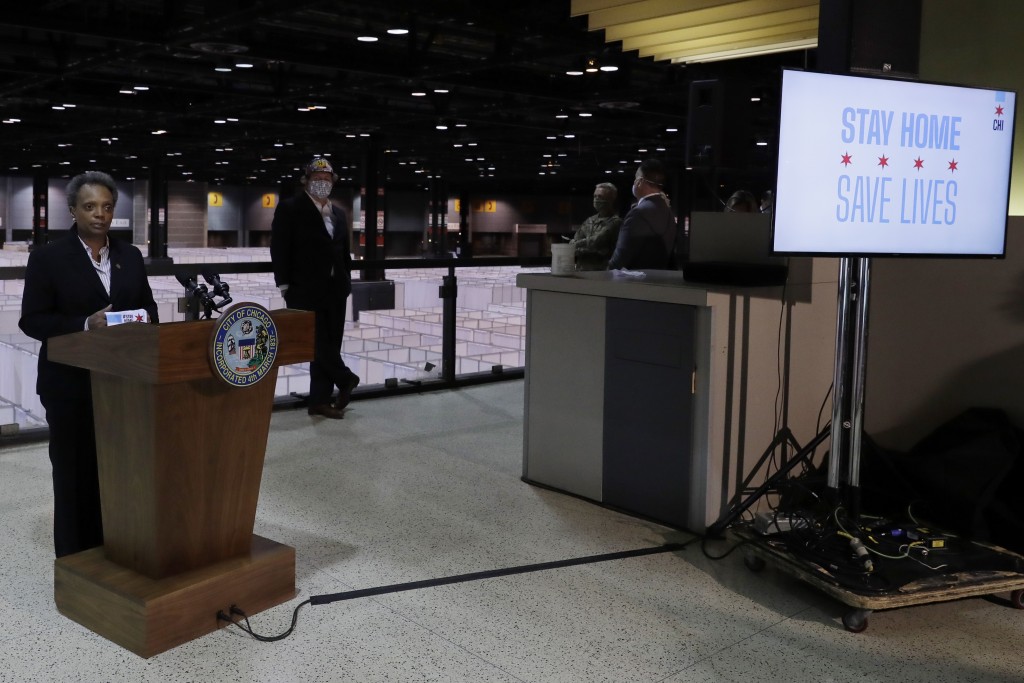 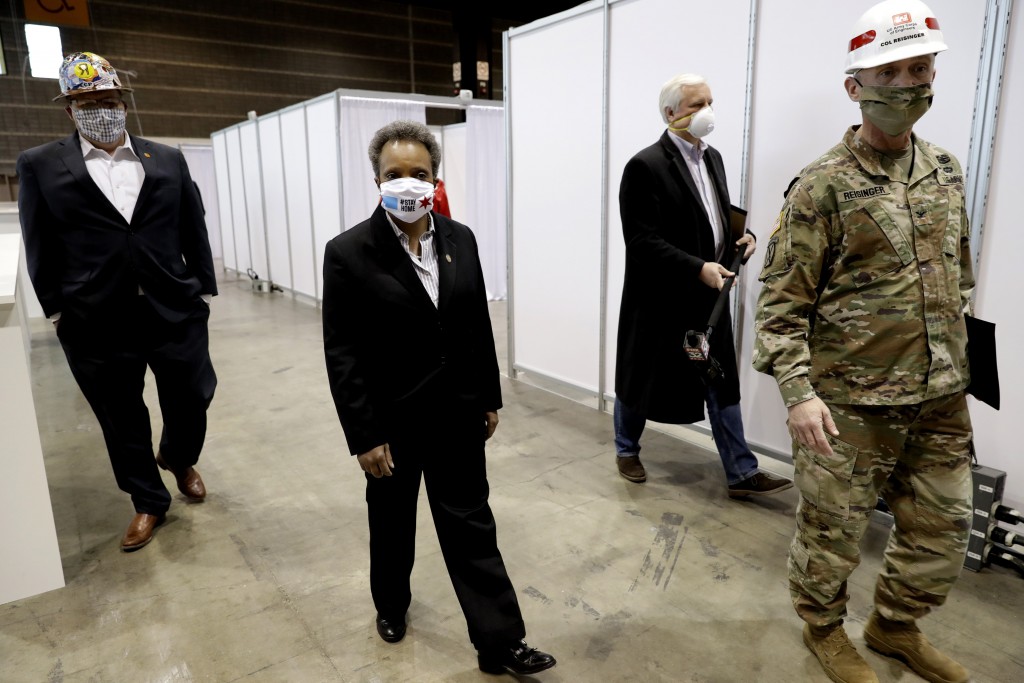 Lightfoot’s hard-line approach began with an exasperated announcement in March that she was shutting down lakefront trails, adjacent parks and other crowded public spaces after Chicagoans flocked there on a 70-degree weekday.

“Your conduct — yours — is posing a direct threat to our public health,” Lightfoot chastised people spotted flouting social distancing orders.

Her tone earned the first-term mayor — the city’s first black female and first openly gay mayor — begrudging respect from some residents and inspired a wave of memes. Many edited a stone-faced Lightfoot into photos of the city’s parks or famous artwork. After weeks of quarantine-induced snacking, others printed photos of the mayor’s stern expression, captioned, “You just ate” and taped them inside fridges.

On Twitter, Lightfoot embraced the humor in a video depicting her at home as a sports fan rewatching classic games, an aspiring home baker and a guitar-picking songwriter — all with the message to “stay home, save lives.”

Chicago has reported 7,230 cases of COVID-19 and 218 deaths as of Friday afternoon — about 40% of statewide cases and 36% of deaths across Illinois. Like Detroit and New Orleans, a disproportionate number are blacks. Blacks account for 72% of deaths from COVID-19 complications in Chicago and 52% of positive tests for the coronavirus, despite making up only 30% of the city’s population.

In recent days, Lightfoot has taken her efforts a step further. At a press conference announcing a 9 p.m. curfew for liquor stores this week, Lightfoot said she had ordered groups of people to “break it up" while driving in a North Side neighborhood.

“Yes,” she said, nodding slowly. “And I’ll continue to do that. I mean what I say. We have to protect ourselves. We have to be smart about what we’re doing in the course of this pandemic. And if it means that I drive around and check whether or not people are in compliance, I am happy to do it.”

In reality, the city’s police force has been the true enforcers of Illinois' stay-at-home order and Lightfoot’s restriction.

Since March 25, the day Lightfoot ordered the lakefront and parks closed, police have dispersed 2,264 groups of 10 people or more, police spokesman Tom Ahern said. Interim Superintendent Charlie Beck issued a warning then that the time for educating was over and the time for enforcement was ramping up. On Friday, Ahern said officers had written 11 citations and made 17 arrests on disorderly charges after refusing to disperse.

In anticipation of Easter, Ahern said the department has been “in constant contact with community leaders, clergy and neighborhood groups” to ensure they follow the public health order. He said officers will check Sunday morning to make sure congregations and other groups are doing so.

Lightfoot urged people to watch live-streaming religious services from home and avoid in-person gatherings. She warned that religious and family celebrations risked reversing the city's progress at slowing the rate of new cases.

“This is tough on all of us, myself included, who look to this time to practice the traditions that mean so much to us and our loved ones,” she said. “But it's imperative that this year, we worship in a new way.”

For Chicagoans, coronavirus arrived in late January, when city health authorities reported that a local woman who had traveled to Wuhan became ill after returning home.

Early on, Lightfoot echoed the message of the city’s public health officials and federal agencies: It’s unlikely someone in Chicago will get sick but take precautions.

By early February, Lightfoot was already irritated with what she called poor communication by federal health authorities.

Her criticism of President Donald Trump’s administration built as the virus spread across the country. Though Illinois officials expressed hope in recent days that the state had begun to “bend the curve” of reported cases and other data points tracking COVID-19 illnesses, Lightfoot said this week that she won’t feel comfortable lifting restrictions without widespread testing to reassure people that they are not infected.

“The trajectory of cases has changed and changed for the good,” Lightfoot said. “But I’m hesitant to even say that much.”

One quiet reminder that the area is not out of danger can be found in an announcement this week that the county had lined up a refrigerated warehouse and refrigerated trailers that can store more than 2,000 bodies if Chicago sees a surge in deaths similar to New York.

And Lightfoot on Friday spoke to reporters from McCormick Place, North America’s largest convention center, which has been turned into a pandemic-battling field hospital yet to see its first patient.

It hasn’t been all memes and shareable videos for Lightfoot.

She was criticized by local media — and some hairdressers abiding by orders to shut down their salons — for having her own hair cut in early April. The mayor defended it, saying she needed to represent the city on a national stage.