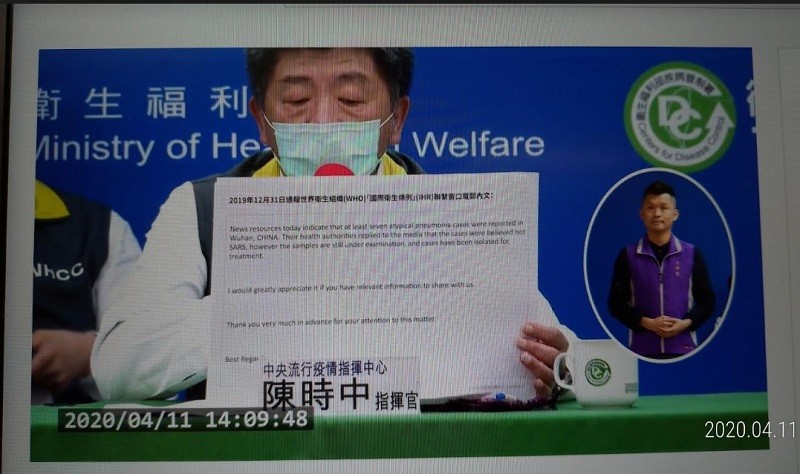 TAIPEI (Taiwan News) — The Central Epidemic Command Center (CECC) on Saturday (April 11) showed an e-mail it had sent to the World Health Organization (WHO) on Dec. 31, 2019, to counter the latter’s allegations that Taiwan had never mentioned that human-to-human transmission of the Wuhan coronavirus (COVID-19) was possible.

Taiwan and the WHO, in particular its director-general, Tedros Adhanom Ghebreyesus, have been engaged in a heated exchange, with the latter even accusing the island country of “racism.” The remark has stirred widespread indignation in Taiwan, with citizens launching petitions to counter the WHO chief’s allegations.

At the daily CECC news conference Saturday, Health and Welfare Minister Chen Shih-chung (陳時中) revealed the text of an e-mail telling the WHO about the emergence of an atypical virus.

“News resources today indicate that at least seven atypical pneumonia cases were reported in Wuhan, CHINA. Their health authorities replied to the media that the cases were believed not SARS; however, the samples are still under examination, and cases have been isolated for treatment,” the message said.

“I would greatly appreciate it if you have relevant information to share with us. Thank you very much in advance for your attention to this matter,” the e-mail concluded.

The message showed that the WHO’s response amounted to an example of “insiders speaking like amateurs,” Chen said Saturday. Anyone with medical training would understand the message as saying it meant patients should be isolated, the minister added.

Chen called on the WHO to actively resolve the situation and not to commit one mistake after the other by trying to divert attention away from real problems, CNA reported.