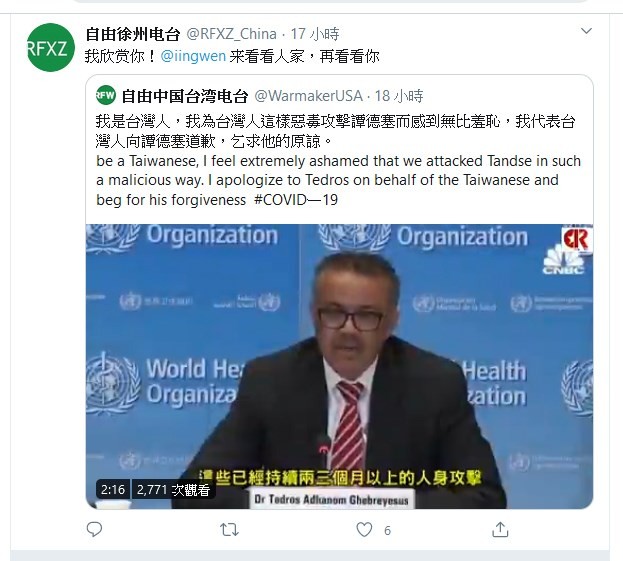 TAIPEI (Taiwan News) – Taiwan's Investigation Bureau (MJIB) has shot down WHO Director-General Dr. Tedros Adhanom Ghebreyesus' claim of a racist campaign against him from Taiwan — and has instead pointed the finger of blame at China trolls.

In a regular press briefing on Friday (April 10), the agency said it found no racist comments or death threats had been made against the World Health Organization chief from Taiwanese. Instead, it highlighted more than a hundred tweets or comments made beneath U.S. news articles that made fake apologies to Tedros, pretending to be from Taiwanese.

One fake tweet was written in traditional rather than simplified Chinese characters, and read: "I am Taiwanese and feel extremely ashamed of the racist comments against Tedros made by our people; I apologize to him on behalf of my fellow countrymen and beg for his forgiveness."

Some of the tweets even added pictures of a Taiwan national health insurance card and ID card to "verify" their identity claims. Even so, Taiwan's cyber crime investigators found they were probably trolls from China, based on the digital footprints.

The fake tweets were intended to taint Taiwan's reputation, the agency added. It will continue to investigate the tweets and urged the public not to share misinformation.

Meanwhile, Taiwan Premier Su Tseng-chang (蘇貞昌) is joining President Tsai Ing-wen (蔡英文) and Foreign Minister Joseph Wu (吳釗爕) in demanding Tedros apologize for his misleading accusations against Taiwan. They pointed out Taiwan has been a victim of Beijing's bullying tactics for many decades.

China has used its influence to exclude Taiwan from participating in major international organizations. As such, Taiwan knows very well what discrimination and unjust treatment feel like, they said.

"Despite the bullying and being left out from the world stage, Taiwan remains dedicated to helping people in need globally and make contributions to the world," Su said.

He also criticized Tedros for intentionally ignoring the fact that Taiwan has been offering assistance and aid to his home country of Ethiopia. This includes providing training to medical professional free of charge.

The premier said he hoped Tedros would apologize for his misleading accusations and put the facts straight.