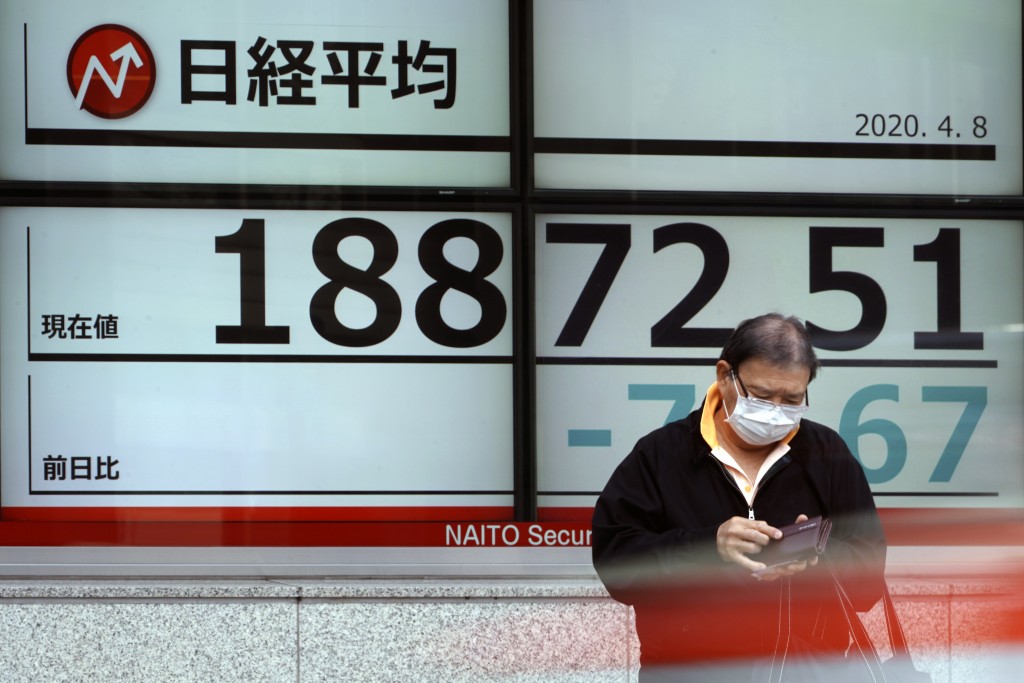 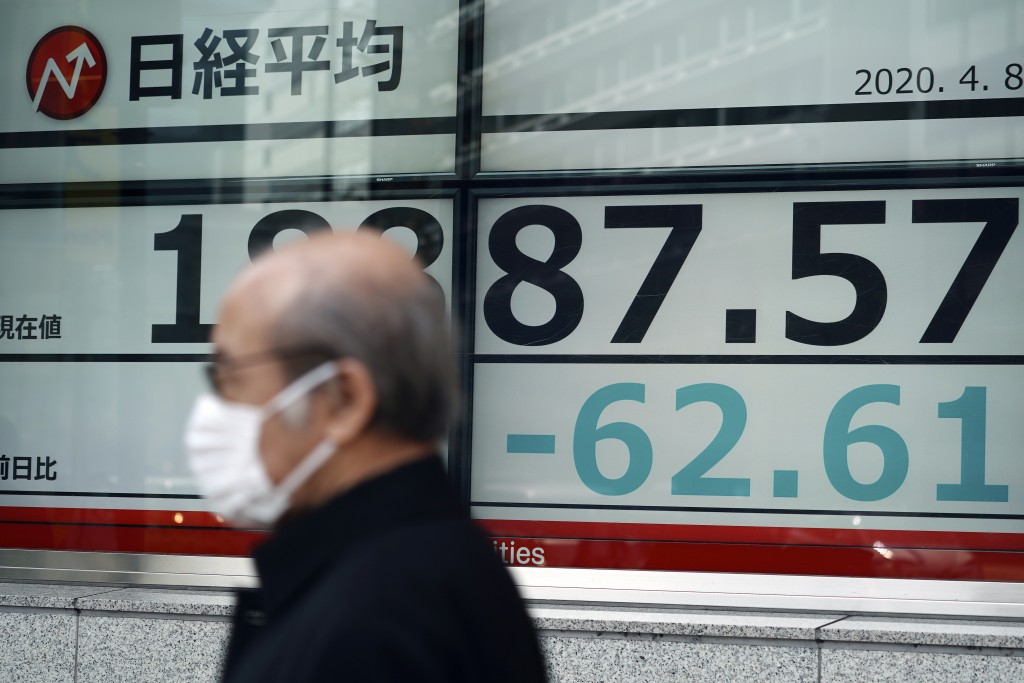 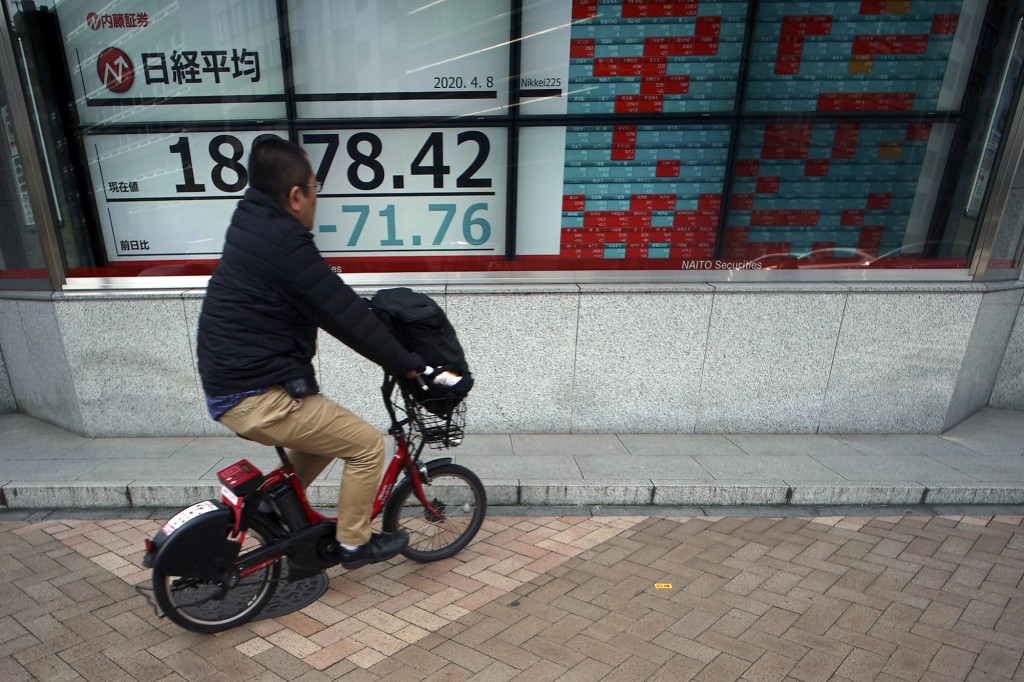 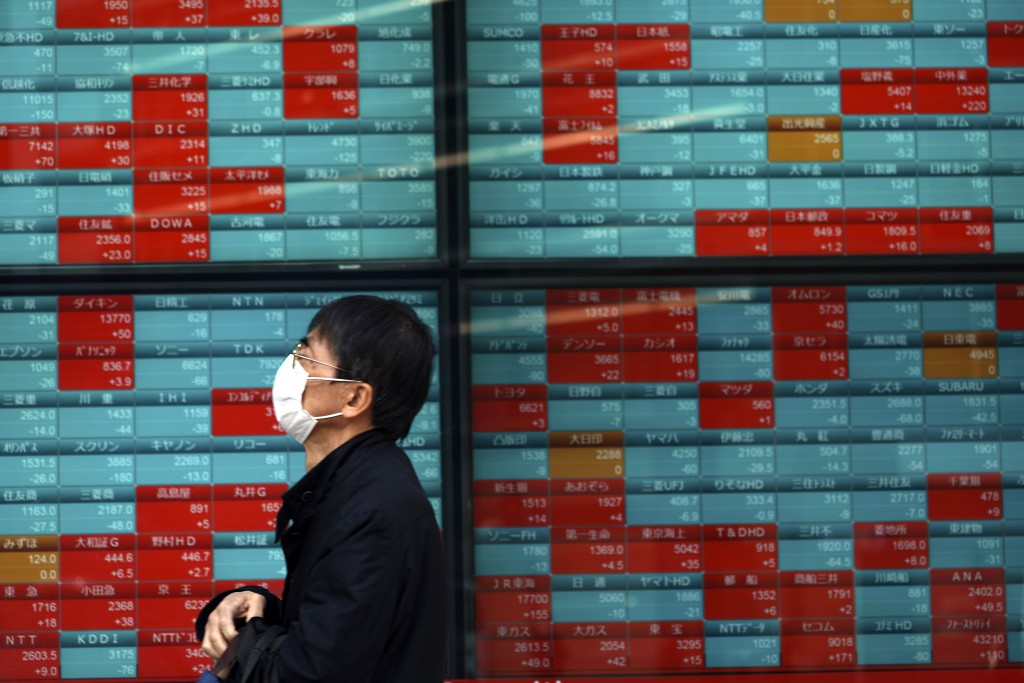 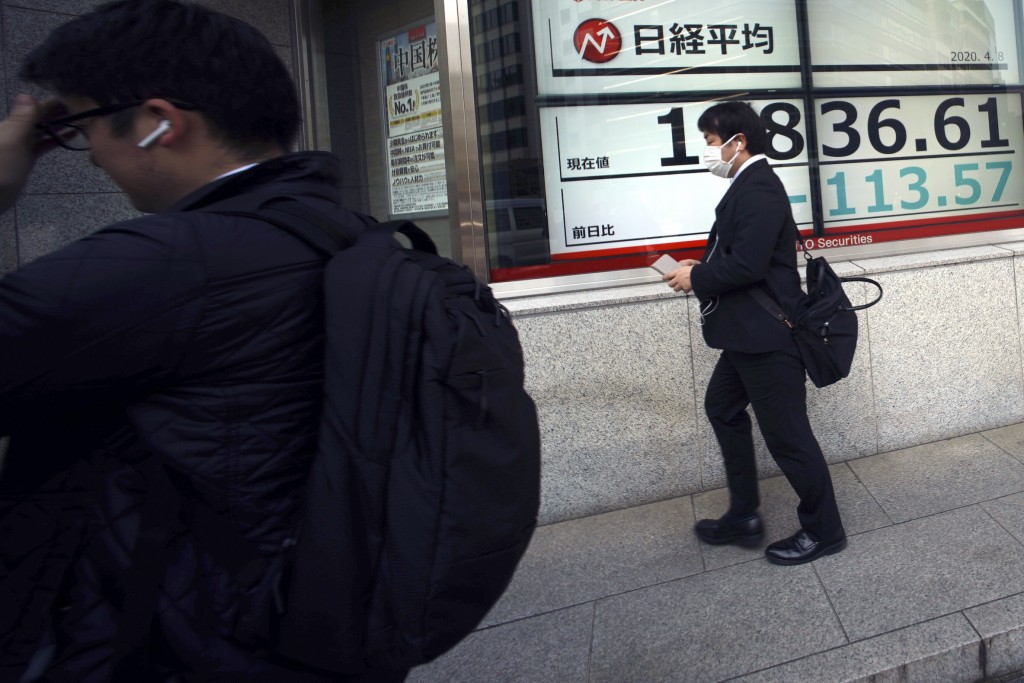 TOKYO (AP) — Japan's benchmark advanced but other Asian shares fell Wednesday amid uncertainty over the coronavirus outbreak, which continues to claim more lives around the world.

A short-lived rally on Wall Street suddenly vanished in a market dominated by sharp swings responding to the ups and downs of the news about the pandemic.

“The recent risk rally faded quickly despite recent stimulus efforts from both monetary and fiscal authorities, with market players coming to terms with the unabated rise in fatalities as the virus continues to spread,” Prakash Sakpal and Nicholas Mapa, economists at ING, said in a report.

In Asia, Japan's state of emergency kicked in, focused on seven urban areas, including Tokyo, with strong government requests for people to stay home and restaurants and stores to close for a month. It was unclear how effective the entirely voluntary measures would be.

Goldman Sachs said in a report that Japan’s economy is headed to a record 25% contraction in the current quarter, with exports diving by 60% in the April-June period. The contraction for the world’s third largest economy would be a record, since GDP, or gross domestic product, began to be tracked in 1955.

Japan’s economic activity will likely recover with the third quarter and GDP is expected to grow 3.1% in 2021, it said.

But on Wednesday, benchmark U.S. crude oil surged $1.18 to $24.81 a barrel in electronic trading on the New York Mercantile Exchange after President Donald Trump reiterated in comments to Fox TV that he expects Russia and Saudi Arabia to resolve their price war. U.S. crude had fallen $2.45, or 9.4%, to settle at $23.63 per barrel Tuesday.

Brent crude, the international standard, gained 61 cents to $32.48 on Wednesday.

Even though economists say a punishing recession is inevitable, some investors have begun to look ahead to when a peak in new infections would offer some clarity about how long the downturn may last and how deep it will be.

Investors could then, finally, envision the other side of the economic shutdown, after authorities forced businesses to halt in hopes of slowing the spread of the virus. In the meantime, governments around the world are talking about pumping trillions of dollars more of aid for the economy.

Many professional investors say they’ve been wary of the recent upsurge and expect more volatility ahead. The S&P 500 has rallied nearly 19% since hitting a low on March 23, though it’s still down 21.5% from its record set in February.

Such concerns were borne out in Tuesday's trading, when the S&P 500 swung up, down, up, down and back up again through the day.

“We are still in what you would call the relief rally off of the prior low,” said Sam Stovall, chief investment strategist at CFRA. He noted that this kind of a rally is common within deep bear markets, Wall Street-speak for when stocks decline 20% or more from a peak.

“There’s no guarantee that the worst is behind us, yet traders believe that at least there is some short-term money to be made,” Stovall said.

Experts say more deaths are on the way due to COVID-19, which has already claimed at least 82,000 lives around the world. The U.S. leads the world in confirmed cases with nearly 400,000, according to a tally by Johns Hopkins University.

More economic misery is on the horizon. Economists expect a report on Thursday to show that 5 million Americans applied for unemployment benefits last week as layoffs sweep the country. That would bring the total to nearly 15 million over the past three weeks. Analysts also expect big companies in upcoming weeks to report their worst quarter of profit declines in more than a decade.